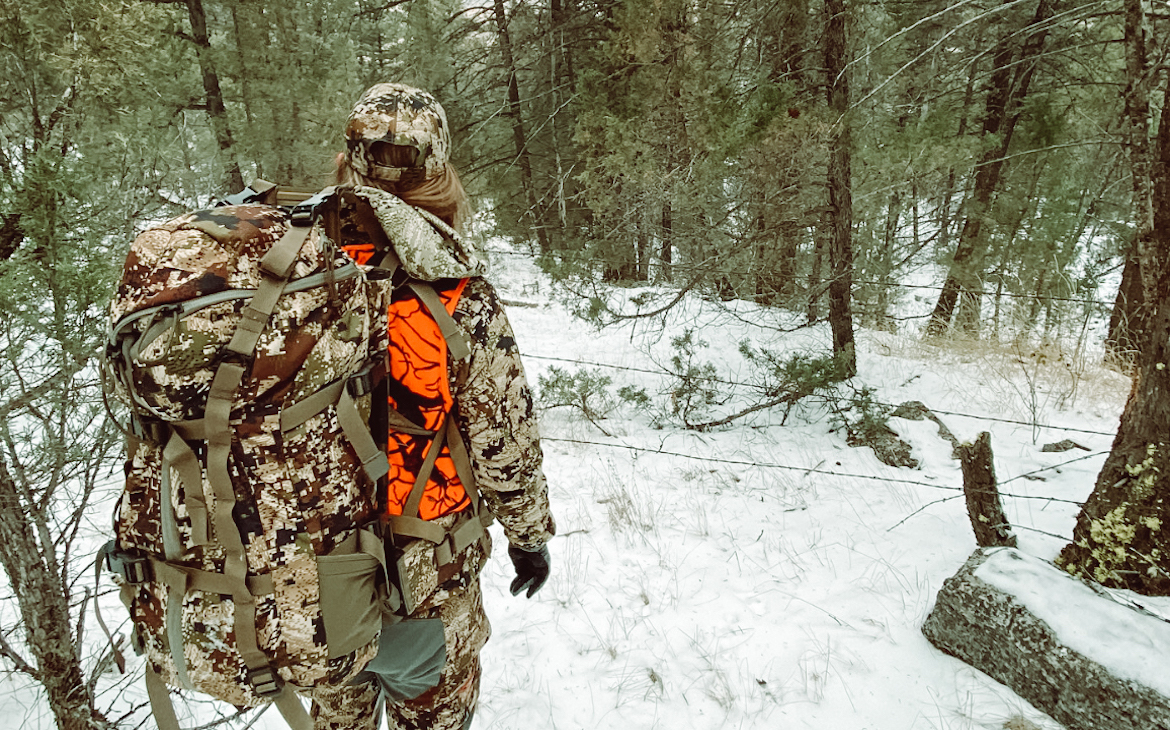 Until last year I hesitated to call myself a hunter. Other people referred to me as a hunter but I always downplayed the comments. I knew why my friends viewed me as a hunter. I have quite a few hunting stories. My husband and I went coyote hunting the day we got engaged. We took a Hawaiian “huntingmoon.” And we moved to Alaska to chase moose, caribou and mountain goats.

While all of these hunts had me beaming with pride, I never felt Iike a hunter. It’s not just because I wasn’t punching tags. It was also because my husband was the one leading the charge. He put in the work researching the hunting locations, talking to wildlife biologists and choosing the gear, while I focused more on new motherhood and my career.

After years of feeling like a tag-along, last season I decided to step out of my comfort zone. I took some major initiative and it paid off. Not only did I harvest a black bear, whitetail deer and four species of duck, I learned a ton, even on the days I never fired a shot.

Here are a few takeaways from my first successful big game season.

Hunt with Someone Other than Your Spouse

I love hunting with my husband, don’t get me wrong. He introduced me to this passion. Being out in the wild together looking for critters is better than any date night in town. However, I feel like tips and—let’s be honest—criticism from your spouse just doesn’t sink in the same as when it comes from a friend or mentor.

I learned this last year when I attended a women’s-only hunting seminar. I had heard so much of the information discussed from my husband, except in this new setting it was a like a lightbulb going off in my head.

Don’t be Afraid to ask Permission to Hunt Private Land

I spent several days hunting public land in a region where I drew a mule deer tag and felt confident my efforts would pay off. But as the season was drawing to a close, I started to lose hope. Then I ran into a rancher I had met through work who mentioned he had white-tailed deer on his property.

I mentioned the chance encounter to my husband who quickly responded, “Well, did you ask for permission to hunt his land?” I was nervous at just the thought of asking, but my husband assured me the worst thing that could happen was he would say no. Luckily, the rancher said yes and that led to me harvesting my first deer on his family’s property! I’m so very grateful for his generosity and happy that I took a chance and just asked.

Give Yourself Extra, Extra Time

I’ve heard set your alarm an extra 30 minutes early in the morning to make sure you’ve got plenty of time for the unexpected. From my experience, newer hunters should add an extra 15 minutes on top of that. Even if you feel like everything is packed perfectly the night before, you might wake up and remember one more thing.

In my case, I was so focused on the hunt that I forgot to fill my car with gas. Then, my credit card wouldn’t run at the gas station so I had to drive to another. In case you’re wondering, I did not make it to my hunting spot before sunrise that day.

Decide What You’re Willing to Shoot Before the Hunt

I’m incredibly proud of the first big game animal I ever shot, a gorgeous cinnamon black bear. Not only was the bear beautiful but the spot-and-stalk hunt was a rush. However, I am still a little tender about its size. Before the hunt my husband and I discussed what size bear I’d be willing to shoot. I said, “I don’t care if it’s not that big, I don’t need a trophy sized black bear.”

When it came time to shoot and I had the bear in my sights, my husband asked again, “Okay, are you sure? He’s not that big?” I said yes and took the shot. When we got to the end of the blood trail we found a small, male black bear. The wildlife biologist at Montana Fish Wildlife & Parks who sealed the bear reassured me that many hunters shoot bears they think are bigger. The bear wasn’t a cub and was legal to harvest but I still wish it had been older and that I had more clearly defined to myself what I would feel good shooting.

Take Time with the Shot

In the adrenaline rush of pulling the trigger on my first big game animal, the black bear, I ended up needing to take a second shot because the first one wasn’t lethal. So, when it came time to fill my deer tag that fall, I knew not to rush the shot.

For about 30 minutes I watched two deer wander around 90 yards away from me. I watched them through my scope the entire time. I debated which one was bigger and which one I had a better shot on. I was so determined to make the perfect shot, I almost lost my chance when they disappeared behind some trees. When they reappeared, I waited until I had the vitals in my crosshairs. I steadied my hands and breathing, and squeezed the trigger.

One of most exciting parts of harvesting that deer was seeing where the bullet penetrated the heart. I made a perfect shot. It makes me so proud knowing I took my time to harvest that deer and end its life quickly and ethically.

Don’t be Afraid to Go Solo

Last season was the first time I hunted alone. It was in part because my husband and I have two kids and no family within 1,000 miles. Most hunts were mornings and evenings before and after work. As much as I’ve learned from my husband and other hunters, time alone in the field brought me to a whole new level of confidence. I had to depend entirely on myself. I couldn’t whisper a question to anyone or have them check the wind direction. I had to do it all. I made some mistakes but those failures will only serve as lessons on my future hunts.

I’m proud of the work I put into my first successful year harvesting big game. Whether or not you fill your freezer, I hope these tips help you proudly earn your title as a hunter.