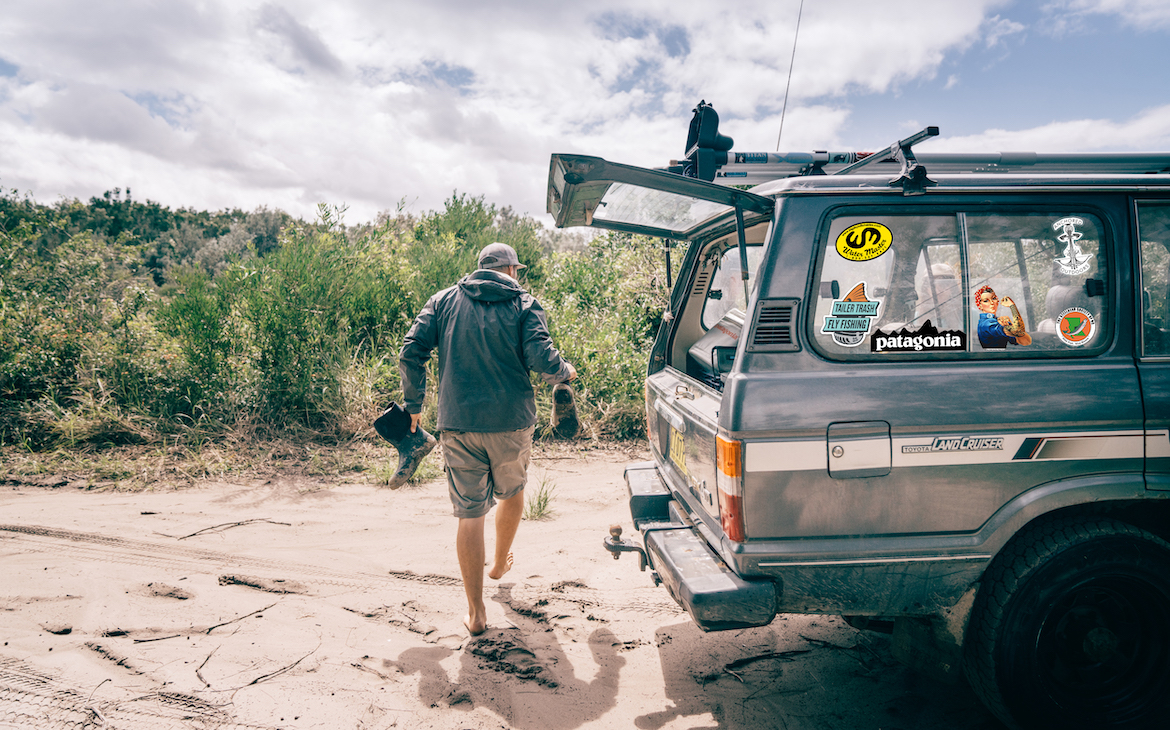 Surely you have seen stickers for sale at a fly shop, picked up a few at a show or have been given one or two by a friend. While mostly viewed as a promotional item (even though most times you pay for them), there is a secondary market that exists for these colorful, uniquely identifiable pieces of vinyl.

Beyond their intended purpose of building a brand, promoting products or memorializing an event; stickers are themselves a form of currency in the fly-fishing community. A few years back I flew out West and joined a friend for a few days’ worth of adventure and the concept of their value really gelled in my mind.

A Sticker Marks the Spot

For the last hour or so, the hum of well-worn radial tires has provided a subtle soundtrack for the wide-open spaces that make up the landscape of the high desert plateau we’ve been crossing. The expansive vistas of red and sage hues have filled the cracked windshield of a well-worn, but trustworthy, Subaru wagon that is our steed this late-summer day. With a poke of the wheel, we dart left across the empty oncoming lane and then, much like the abrupt change brought by tapping a radio preset button, the sound of crushing gravel fills the air.

We’re setting off a plume of dust now, the kind Roy Rogers would have used to spot the approaching trouble of banditos closing distance towards the ranch. As the twists and turns of the narrow lonely road tighten, we start to gain elevation, climbing steadily toward the upper reaches of a canyon that begins to shrink around us.

“We’re not even close,” I’m told by the wheel man, a stark reminder of the vastness we’re entering. Off to the right, clear cold water is flowing across a meadow a few hundred feet away, in a purposely nameless river, but it may as well be a mirage. We’ll never get to touch it; ever-present no trespassing signs hang precariously from weathered fence posts that carry rusted barbed wire for miles.

I’ve lost count of the cattle guards we’ve crossed, but the one ahead peaks our attention. There is a bullet scarred forest service sign hanging on the fence post that stands sentry along its right side. There is nothing remarkable about the gouges and holes cut through the aluminum by hot lead, or the brown hue of the sign itself; but there is a faded green and white oval sticker that resides in the lower right corner of it that gives us pause.

Just as I recognize the iconic sticker on the trailhead marker, I hear the wheelman say; “Looks like we’re in the right place.”

The presence of a lone vinyl sticker, albeit faded and curling about its edges, marked our entry into a place we would enjoy for hours.  Alone.

For the better part of 10 hours we waded, hiked and sometimes scrambled up the tight cliff-lined confines of a drainage we had been told to visit by a friend.

The river was kind. Reckless and willing, cutthroat trout kept us entertained by murdering the oversized foam patterns we threw. If a rock or log looked fishy, it was. Even poor casts were rewarded most times.

Fly fishing is more than a pastime, or a sport; it’s a lifestyle and culture that is embodied by the varied and often idiosyncratic personalities it collects. The price of admission into the club can be steep, with gear that sports price tags that should be cause for embarrassment and distain. Despite the oft leveled charge of elitism that follows, many of the practitioners of this loosely-held community prefer to trade in a more reasonable economy fueled by favors and stickers.

Just like the sticker adorning the sign along that desolate road in the middle of nowhere, each one carries a value. From the start-up fly-fishing venture that seeks to draw a following, to the individual who meters out an obscure and limited run of vinyl goods to his closest friends, they speak to the brotherhood and belonging that is integral to fly-fishing culture.

You won’t find fly-fishing stickers on a currency exchange, with values displayed alongside. They’re subject to a more intrinsic method of valuation, like when bartering at a remote frontier trading post was alive and well.

Whether you’re slapping a sticker across a fridge at the airport bar where other anglers have done so before by the dozens, or applying one to a bridge abutment along a desolate pothole-filled coastal bi-way on a small island in the Caribbean, you’re dropping coin to mark territory.

Some would say you’re riding for the brand, like cowboys of old, who were fiercely loyal to the mark that was left by a white hot, glowing iron.

Give it a try, bestow the coolest or most rare of stickers you have to a friend. You may be surprised, but it’s likely you will receive an unexpected parcel full of fresh flies or stickers in return. If not, you may want to seek out a better swag source or create some currency of your own. Limited edition and unique stickers will be viewed as having the highest value. Don’t expect to see a return on investment if you send a boring, commonly seen branding piece from last week’s show.

When you travel outside of your zip code, you’ve likely seen evidence of those that have passed before you. Hopefully, with a better understanding of a sticker’s potential value and the doors it may open, be prepared to add to that mosaic collection of calling card-like vinyl wherever your travels take you.

Looking for some of your own unique currency? We’ve got you covered here: