Home » How to Talk to Your Kids About Hunting – Jackie Holbrook

How to Talk to Your Kids About Hunting – Jackie Holbrook 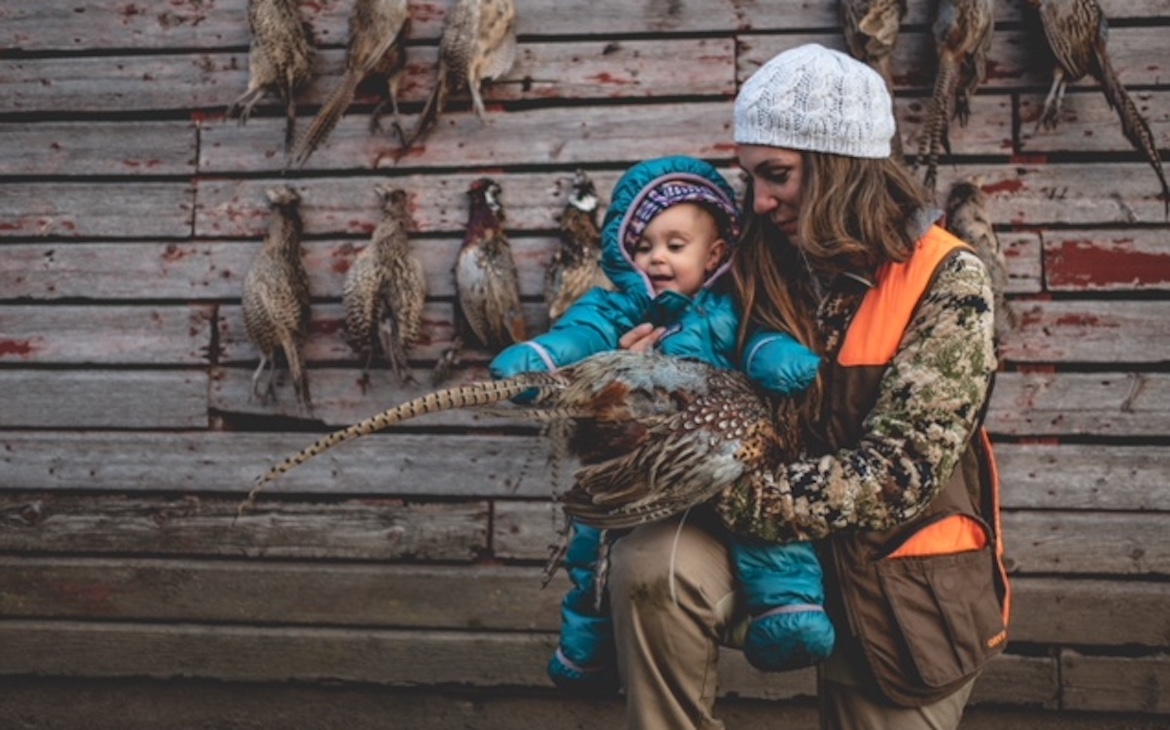 Most children love animals. But when I was a kid, I didn’t just love animals, I was convinced I was one. The dolls my mom bought sat untouched in boxes, instead, My Little Ponies could be found around every corner. While my friends pretended to be princesses, I was barking like a dog or neighing like a pony.

I was an over-the-top animal-loving child. I also grew up in a household with a passionate hunter. My dad’s office was filled with mounts, and he’d cut up elk, deer and antelope meat at the kitchen table. While some people might worry our passions would come into conflict, that was never the case. My dad shared my love of wildlife and nature. My favorite memories involve fishing, hunting and exploring the outdoors together.

As an adult, I still consider myself an animal-lover, as well as a passionate hunter. I’ve also added the title of mom. Hunting is a huge part of my life, and it’s something my toddler is becoming increasingly aware of. From the time she was born, she’s been scouting, shed hunting and eating all kinds of wild game like elk, moose and caribou. She overhears hunting stories, attends hunting camp and sees us process meat. Hunting is just part of her life but I know one day she might have questions, and I need to have the right answers.

Hunting involves so much more than killing an animal, and I’ve had to explain that to people a lot. Hunting takes you on amazing adventures, provides money for conservation, and gives you a deeper connection to nature and your food. Hunting isn’t all about killing, but sometimes it involves the death of an animal and that can be a complicated subject to talk about with kids.

Here’s some advice from people who are passionate about talking to children about hunting:

“It’s really important to share with kids how plants and animals in the wild are connected via food chains and food webs. That language is too advanced but the concepts and principles of interconnectedness between plant and animal species are paramount to introducing ourselves as hunters and anglers,” said James Jubran, co-owner of Smile Outside. Jubran and his brother, Luke, write children’s books about fish, wildlife and wild lands. Their books are meant to engage and educate children about conservation and the natural world.

“Some animals eat plants and some animals eat other animals, it’s a simple concept that needs to be pointed out and examples need to be continuously provided as we simultaneously explain that we too, hunt and fish so that we can live and feed our families,” Jubran said.

In the Smile Outside books, the animals aren’t talking characters, instead, they’re portrayed how they would be found in the wild. “This reality of life and death is one of the reasons we find it so important in our books to portray animals in their natural beauty, so we can show those connections and allow for conversation between child and adult to take place, rather than put all the animals in clothes and give them a narrative,” Jubran said. “Allowing kids to see nature in action allows for a much smoother understanding of how we as humans fit into that natural process as well.”

Be Open and Honest

“My number one piece of advice is that parents should always be honest and upfront about hunting and what it’s about. Kids are smart, they’ll figure it out if you try to pull one over on them,” said Beka Garris, a mom and avid traditional bowhunter. Garris bowhunts with her daughter and her social media is filled with photos of the pair’s outdoor pursuits.

“My daughter is just getting to the age where she is curious about things and can finally start talking somewhat,” Garris said. “If we have venison for a meal, I tell her it’s deer. She knows what deer are. If we’re having chicken, I’ll tell her it’s chicken (we have chickens).”

Garris strongly believes that if children are raised knowing that animals are a food source and see that hunting is a critical component of that, they will develop an understanding of hunting. “I know my siblings and I were always around when my dad was butchering deer and I never blinked an eye. It’s just how it was,” Garris said.

Kyle Mlynar grew up hunting with his father, grandfather and a good family friend. “We hunted a lot and we ate what we harvested. That’s just what I knew,” Mlynar said.

Now as a father, Mlynar is passionate about passing his hunting heritage on to his daughters. “I tried to keep it simple and basic. I went out with the mentality that we were exploring and looking for animals and if all went well, we might get some meat for the freezer.”

Mlynar believes too many people have forgotten that the meat they buy at the store was once a living animal. He wants his children to know that for people to eat meat, an animal must die.

“It was important for me to convey that hunting is part of our lifestyle, as it is where our meat comes from,” Mlynar said. “We have pets at our house and just like most kids, mine are animal lovers. Having said that, they know different animals have different purposes. They know deer are animals we eat, they know dogs are pets or used for hunting and they know horses are for riding. Either way, they all have a purpose.”

Mlynar believes the lessons from hunting translate into other areas of life. The patience, perseverance and at times, uncomfortableness of hunting trips, make for a better childhood and build character. He says raising hunters means raising strong children.

“I also think it’s important not to shelter kids when it comes to our food and the facts of life,” Mlynar said. “As a society, we seem to struggle with being honest with our kids and we try to protect them, but a side effect is that they aren’t raised to be aware of what’s going on around them and then when they get older, and they’re exposed to reality, they don’t know how to cope with it.”

Whether it’s sharing a meal of wild game or a day in the field, exposing your children to any aspect of hunting is incredibly rewarding. And having a conversation about where their food comes from and why you choose to hunt, just creates a deeper understanding of the natural world and how you choose to engage with it.