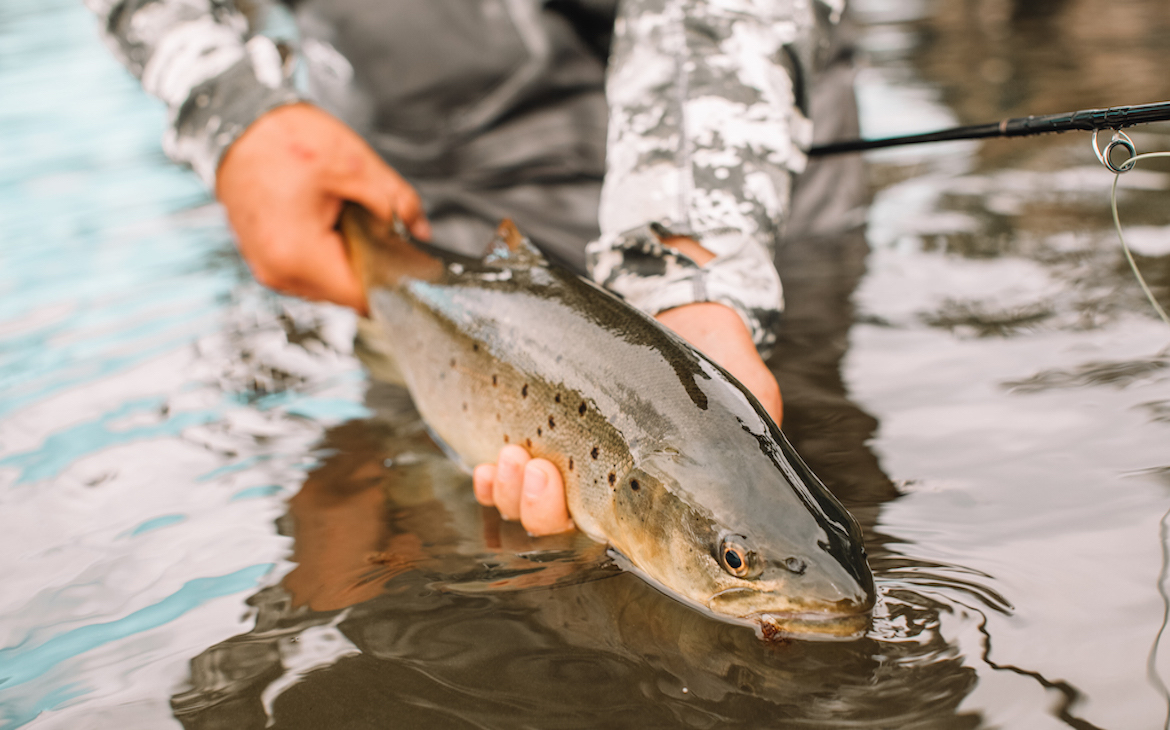 By Gary A. Borger:

Don had invited me to speak at his fly shop, and then spend a couple of days fishing the Cumberland River. The shop engagement went without a hitch, but the fishing trip suffered the slings and arrows of rain, rain, and then more rain. The Cumberland rose an astonishing 17 feet, and our trip there would most certainly have been a futile effort. Don suggested we head into southeast Kentucky to the Daniel Boone National Forest, and fish some of its smaller streams.

We parked at a wide spot along the dirt road, and got out to look at our potential water for the day. The stream was a bit high, but only slightly off color—the heavy forestland had absorbed the rains, giving us a chance to at least fish for a while. Whether the fish were feeding or not was another story.

I had fished many such streams in northwest Pennsylvania, under similar conditions as a child, and knew that the day could simply evolve into casting practice, rather than a fish-catching expedition. Still, we were there, the day was lovely, and besides, I wanted to fish. And so we set up our gear, shouldered into the fishing vests, and set off. Don headed downstream, I headed up.

Knowing full well that the fish would be feeding deep, I rigged up a couple of nymphs, shot, and an indicator, and began prospecting the gravelly bottom of the stream’s small pools. Nothing of any significance happened—that is to say, I didn’t catch anything.

Usually under these circumstances, I stick with my nymph selection for several pools before making any changes in the imitations; and so, after a half dozen of these potential fish-holding areas yielded nothing, I decided to have a look in the fly box.

My eye fell on a clump of size 16, black Foam Beetles. Nipping the two nymphs off the tippet, I tied on a beetle. The shot was about 10 inches above the imitation, and the indicator about 4 feet above the shot. I wish I could say that the first cast was successful, but no, it was not. However, after a few minutes, the indicator halted in its drift, and I tightened on a nice little brown of about 10 inches. My confidence renewed, I released the fish, and began fishing a bit more determinedly. My fear of spending the day in casting practice evaporated, and as the minutes slipped by, my catch increased steadily.

Suddenly, I saw Don headed upstream my way. I stopped casting and waited until he caught up. He was a bit off-temper and perplexed. All morning the fish had been chasing his Muddler, but refusing to take it. I asked him to show me how he was fishing the imitation, and he cast into the pool that I was just getting ready to fish. A brown flashed the fly, but showed no further interest in Don’s Muddler, even though he worked it through the area several more times.

“Let me try,” I said, and Don nodded. On the second drift, I hooked a brown that was the same size as the one that had flashed Don’s imitation. He looked a bit irritated—as I suppose I would have been, if the tables had been turned.

“What are you using?” he asked, and not in a gentle way as was his nature.

“A Foam Beetle,” I replied.

“What?” he questioned. “That’s a floating fly, and you’ve got on shot and an indicator.”

I explained that beetles are the most abundant of the insect species, and they are always highly prevalent in forest areas. All the rain, I noted, had probably washed many of them into the stream, and the fish were tuned-in to the submerged insects. Suddenly, Don looked very interested, and I asked if he wanted me to rig his system with a beetle, shot, and indicator. We both had a great day fishing the dry beetle as a nymph.

It’s a counter-intuitive trick I’ve used many times, with a number of different dries. Other dry imitations that work well when fished in the deep nymphing mode include the Elk Hair Caddis, Devil Bug (a dry caddis emerger), Griffith’s Gnat, Variant, Ant, and green Oak Worm. I sometimes fish these imitations singly, but often in a tractor/trailer style with a nymph or another dry. For example, I may fish a bead head prince nymph ahead of an Elk Hair Caddis or Griffith’s Gnat. Fishing a Foam Beetle with a Green Oak Worm or ant can sometimes be very productive. Try any variety of mix and match that comes to mind.

A note about the Elk Hair Caddis. Many female caddis flies lay their eggs on the bottom. They carry an air bubble with them as they oviposit (so they don’t drown). When done, they release their hold on the bottom and pop to the top in their air, diving bell. When the bubble bursts at the surface, the female immediately flies away. This can be mis-interpreted as a caddis “hatch.” Trouble is, this egg laying behavior can be going on even during a true caddis hatch. So, if the fish are rising and not responding to the surface fished dry, try fishing it deep as a nymph, and then swinging it to the surface at the end of the dead drift.

I’ve used a Variant dry fly for the same purpose. A Variant is a “variation” of a standard, hackled dry fly that lacks wings—just a tail, body, and hackle. I simply roll it between my thumb and forefinger to angle the hackle back along the body.

The real secret to fishing dries as nymphs is getting the flies deep and keeping them there. And while Euro Nymphing is a great tactic, it is basically useless when fishing flies like the Foam Beetle on the bottom. Split shot is essential. I use a Compound Tippet when nymphing with dries. The first 4 to 5 feet consists of 1X or 2X tippet material knotted to the leader butt, and terminated in a tippet ring. To the ring I knot on a 10 to 12 inch long segment of tippet material that complements the fly I’m using. For example, if I’m using a size 16 Foam Beetle, I will add 5X (fly size/3 = tippet “X”; 16/3 = about 5X). This shorter segment completes the Compound Tippet. The shot goes on the 1X or 2X, just above the tippet ring. I put an indicator 5 to 6 feet above the fly.

The purpose of the shot is to (1) hold the floating fly down on the fly bottom (after all it was designed to float), (2) anchor the fly against line drag. The size of the shot depends upon the speed of the current and the length of line beyond the rod tip. If I’m fishing the Leisenring Lift tactic with a dry fished as a nymph, then basically only the leader and a couple of feet of line are beyond the rod tip. Usually a couple of bb shot will suffice to keep the fly down. As more line is needed beyond the rod tip, and/or the currents increase in speed, more shot is needed to anchor the fly against line drag—which would pull the fly back to the surface.

When a fish grabs the fly, the moving shot causes the hook point to grab (I keep my hooks needle sharp at all times). The fish reacts to the weight of the shot by moving away, and the indicator shoots under. A hook set seats the point, and the fight is on.

Cast this rig with the Elliptical Stroke. Developed in the mid 1930s on Austria’s River Traun by Hans Gebetsroither, the Elliptical stroke is the key to casing shot, heavily weighted flies, sink tip lines, large, air-resistant imitations, and practically everything except, perhaps tiny nymphs and smaller dries. The fly rodder makes the backcast with the rod tipped 30 to 45 degrees out to the casting arm side, and during the pause between the backcast and forward cast, brings the rod up and around so that the forward cast can be made with the rod in a vertical or near vertical position. This casting stroke separates the backcast and forward cast by 30 to 45 degrees, or a bit less.

My fishing cast uses an elliptical stroke that is tipped out to the side. The back stroke is at about 45 degrees to the vertical and the forward stroke about 30 degrees to the vertical. This keeps the fly line lower over the water than making the forward stoke with the rod fully vertical. The lower line hopefully makes it less noticeable to the fish and takes less time to fall to the water, making it less influenced by winds from the side.

Because of the elliptical pathway of the line, there’s very little to no chance that the line will catch on itself during the stroke. The shot or other weight swings smoothly through the air, rather than being jerked back and forth, as happens with the classic dry fly casting stroke. To really polish the elliptical stroke, flip the wrist back and up-around at the end of the back stroke. This is actually an upward aimed, Hook Curve, which cause the line to climb at the end of the backcast. It is the only way to make a cast that actually rises at the end of the back stroke rather than falling.  It gives the fly rodder great control of the line at all times.

Nymphing with dries is a tactic that deserves a place in every fly rodder’s bag of presentation styles. It may seem unorthodox, but it can be a highly effective technique that can add the joy of success in many circumstances.

Episode #: 29 (click to listen)
Duration: 1 hr 23 min
Topics Discussed: The impact of “A River Runs Through It”, the man behind the books, what the industry used to look like.
Buy Gary’s Books and DVDs: Presentation, Fishing the Film (Fly Fishing – The Book Series, 1)
Bio: Gary Borger is an important part of the fly-fishing community.  Author, instructor, presenter, and all-round wealth of knowledge, he’s been in the industry since 1971.