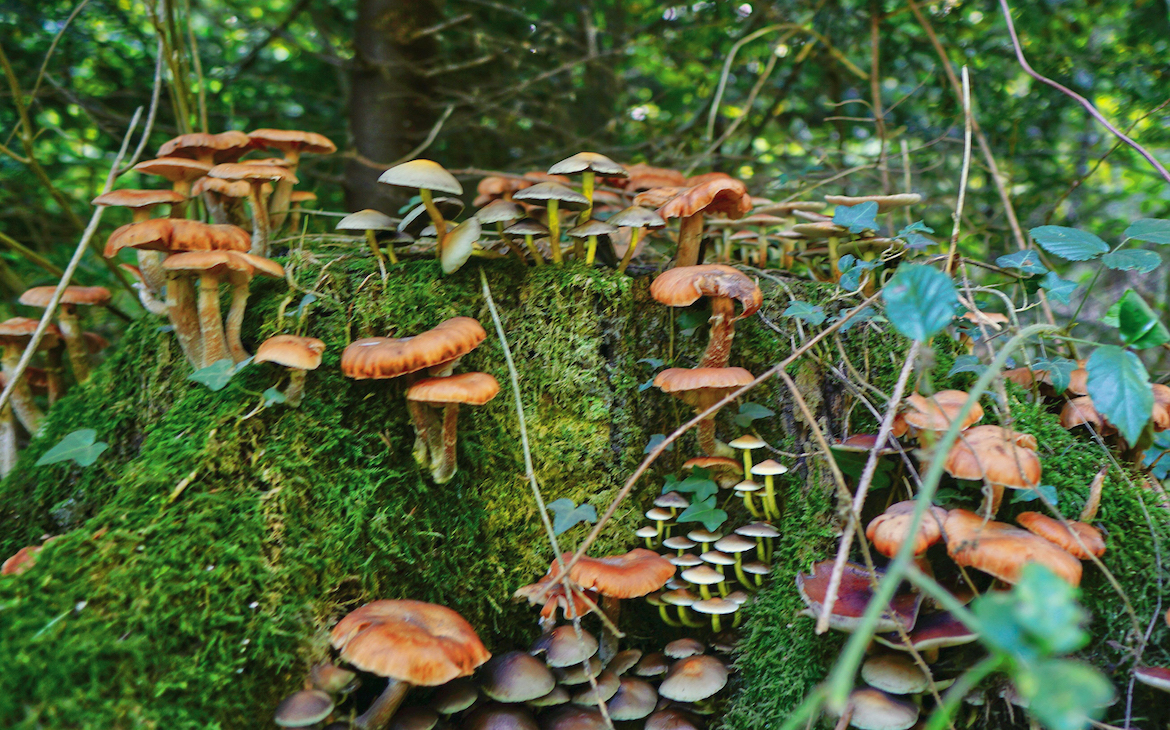 It’s the time of year when us fungal fanatics start itching to get into the woods. Hopefully, you already foraged a bounty of chanterelles and spring oysters. But in case you missed them, don’t fret my friend because there’s still time for a cornucopia of foraged fungi. Get ready for a plethora of honeys, along with some late chanterelles and milkcaps (if you’re lucky or up north). And there’s plenty more with funny names, like hedgehog, puffballs, turkey tail, lion’s mane, dryad’s saddle, hen of the woods, chicken of the woods, and fall and winter oysters await.

Though it’s tempting to want to learn all the mushrooms, it’s close to impossible. There are about 2,000 species where I live in western North Carolina. Instead, I recommend learning the most common, most edible and medicinal mushrooms in your area. And perhaps more importantly, learn the poisonous mushrooms. More than likely, there are very few species in your region that are fatally poisonous. But always know before you go because one of the most common and most poisonous mushrooms in the world, the death or destroying angel, looks like a white toadstool mushroom.

While most mushrooms aren’t fatally poisonous, some people have allergies to one or more species. I have several friends who have reactions to chicken of the woods. In my opinion, this species needs a longer cooking time, at least 20 minutes, and undercooking could cause a reaction. Contrary to popular opinion, all mushrooms should be cooked, even white button mushrooms. This is because they contain a constituent which is in the exoskeleton of insects and shellfish and most of us don’t have the enzymes to digest this. If you’re of Russian heritage you might be able to. Another important thing to note before eating, some mushrooms interact with alcohol consumption if consumed in the same 24-hour period. So, like I’ve said before always do your mushroom research!

You’re responsible for your own safety. Reading about mushrooms in an article is nowhere near enough information to be able to forage them safely. The best way to learn is from someone else. If you can’t find anyone, make sure you cross check several good books with other resources (list at the bottom of this article). It’s a good idea to send photos to someone who knows about mushrooms. Try to find field guides for your specific region. Many cities have mushroom clubs. Look online to see if one exists in your area. Though they may not currently be holding meetings, they might have some good suggestions for resources.

Harvesting most mushrooms is a lot more sustainable than foraging wild plants. The one exception is chaga (Inonotus obliquus) which isn’t technically a mushroom. True mushrooms are the fruiting body of the organism. The part of chaga that is harvested is a canker, called a “sclerotium.” This canker is being overharvested for its wide range of benefits. It takes around five years to reach maturity and can continue to grow for years past that. While there are a lot of recommendations for how to harvest it sustainably, I’d recommend leaving it be. The exception is perhaps if you see a large number and only take about 10%. However, chaga can be confused with other things, like toxic cherry rot fungus. So again, better to leave them to the experts.

Harvesting mushrooms is probably the most sustainable kind of foraging. The container you use to hold your harvest is helpful. My preference would be a loose weave basket or mesh bag. You can buy a fancy one online, pick up one at a thrift shop, weave your own basket or use an onion or potato bag from the grocery store. All these open weave containers allow spores to fall through and reproduce. Just don’t do this with honey mushrooms because there’s enough of them already. In fact, the honey mushroom is the biggest organism on earth, spanning 2 miles across its length.

Be sure to bring a good knife. Type and size don’t matter but a smaller knife can be better because it’s easier to handle. Remember to keep it sharp and learn good knife safety skills. If you have bags, have a way to carry them or something you can clip or tie them to on your pack, so the mushrooms don’t get smashed. And don’t forget your field guide, preferably two, with good pictures and descriptions.

The best odds of finding mushrooms are after rain. Give them a day or two to grow after the rain. You also don’t want to go out right after or in the middle of the rain because you’ll end up with soggy mushrooms.

There are several important things to look for when properly identifying a mushroom. First, notice the growth habit of the mushroom: whether they are growing on the ground or on rotting wood. This can be tricky. Sometimes mushrooms look like they’re growing on the ground but are growing on roots or rotting wood underground. It takes practice and some good resources. Are they growing in clusters or singly? Does it have a cap? Does it have a stalk? One of the most important things to notice, if it does have a cap, is what is on the underside of a cap. Are there gills (like a portabella) or pores (little holes like in your skin), or teeth (lots of narrow structures coming down from the cap)?

Some other observations you could make include any odor or lack of one. Milkcaps (Lactarius species) exude a milky substance. The milk of the tasty ones will sometimes smell like fish. When you break a piece of the cap off, does it change color, and how quickly? Is the stalk hollow? It’s a good idea to also dig below ground to see the bottom of the stalk. If it has a wider, bulbous or egg-shaped bottom (called a vulva), it could be an Amanita, one of those poisonous white toadstools. Those also have little wart-like projections on the top. Field guides will often ask about these characteristics. This is a great chance to practice using your senses, valuable tools when you’re foraging anything.

One identifying characteristic that can sometimes tell you the difference between species are the spores. Spores are one way a mushroom reproduces. Spores can be released from a number of different kinds of structures on the mushroom and come in different colors. Usually when you cut off the cap of the mushroom and place it right side up on a piece of paper the spores will fall onto the paper. Finding the right color paper can be tricky because spores come in all different colors and you want to make sure they show up. I’ve heard some people will put the cap on a piece of aluminum foil to have more chance of seeing them. Put a bowl over the cap, so any air currents don’t blow the spores away. If mushrooms are growing close together, the spores from some of the taller mushrooms may have covered the top of the cap of the mushroom(s) below it. Though, the spores can help you identify a mushroom, it’s recommended not to use them as your sole method of identification.

In these days where technology reigns, there are several mushroom identification Facebook groups. To avoid being lectured by the members when posting, make sure to post clear closeups, including one picture of the top (cap) and one of the underside of the cap. Posting one of the surroundings can also be good. Always remember to post the location, including the geographic area and type of habitat.

Timing and species of what you’ll find from one area of the world or one region of a country to another can be vastly variable. Again, that’s why it’s important to find those regional resources. If you’re in the central to southeastern U.S., your region might match mine (in western North Carolina) and you can check out this article. If you’re just getting started, I’d recommend starting with the species that don’t have any or many look-alikes.

Depending on how dirty your mushrooms are you might want to clean them. If my mushrooms don’t have obvious dirt on them, or just a little dirt, I don’t clean them. Research is showing that dirt is actually packed with good nutrition (probiotics) for our gut health. However, bigger particles can lead to a grainy consistency that can be unpleasant to eat. Some mushrooms are like sponges and will soak up any moisture, making for a soggy mushroom which is super disappointing after all that hard work. I prefer to use a clean tooth or paint brush to brush any dirt or insects off. If that doesn’t get it, try wiping with a damp cloth. Just like field dressing an animal after the hunt to avoid more work later, you can field dress your mushrooms by cutting off the bottom dirty parts in the field. Better yet, cut them right above the ground.

There are quite a few recipes for cooking mushrooms. I’d start with the easiest: cut into about one-half inch chunks. Throw them in a pan big enough to allow space between the chunks. Any moisture in them will be released when cooking and you want to leave room for it to evaporate. If they’re moist, cook any moisture out in a dry pan on medium first. Then, add a decent amount of butter or olive oil (remember they’re sponges and will soak it up) and minced garlic. Cook until crisp. Turn off heat and add salt and pepper to taste. If you’re lucky enough to have an abundant harvest, you can either dry or cook some for a few minutes using the above method, but not all the way through, and freeze them. Mushrooms will stay good in the refrigerator for a few days or longer, depending on how dry they are.

Use your senses and resources to identify a mushroom. Only ingest mushrooms, cooked, if you have 100% positive identification. (If you want to take some home to identify later, put them in a separate bag or basket from the mushrooms you’re positive are edible.) Only harvest mushrooms in good shape, not damaged or soggy, and cut them at ground level. Store them in a mesh bag or basket, being careful not to smash them. When you get your tasty fungus home, clean them with a dry brush or damp cloth, if needed. Store in the refrigerator, dry, cook lightly and freeze Or, my preferred method, cook them up to enjoy with those you love as soon as possible. Give thanks for the mushrooms, the forest, and your full belly.

The Fungal Pharmacy by Robert Rogers

All That the Rain Promises and More: A Hip Pocket Guide to Western Mushrooms by David Arora

Mushrooms of West Virginia and the Central Appalachians by William C. Roody

Mushrooms of the Southeast by Todd Elliot