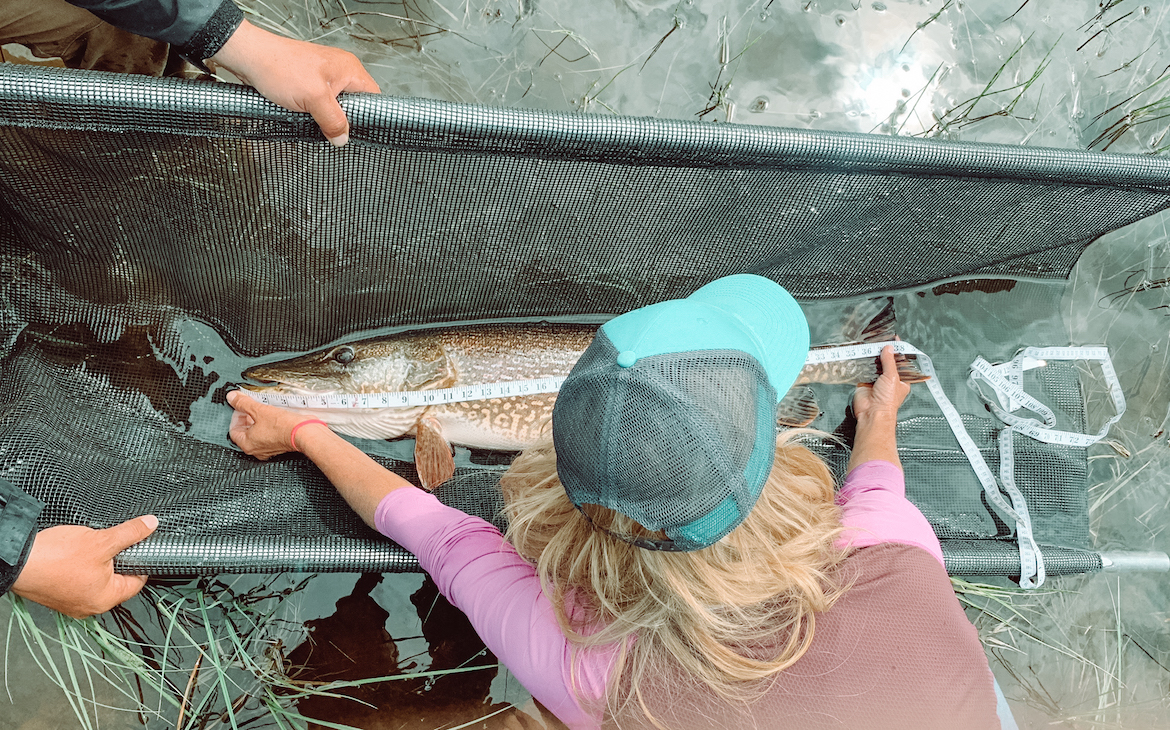 In 2012, I set a new challenge for myself of chasing an IGFA (International Game Fish Association) world record on the fly.

The idea had been suggested by some fishing mentors and film crew/producers of the Outdoor Channel’s “Buccaneers and Bones.” I happened to be a lucky guest at Deep Water Caye the week Liam Neeson and his crew were filming an episode there.

The producers had said that if I wanted to secure a place on the show with Lefty Kreh, Yvon Chouinard, Tom Brokaw, Huey Lewis and others, I needed to become “somebody.” For me, the show would mean free travel and free fishing, something I was definitely interested in as an addicted and budget-sensitive angler. The issue was—as they so politely told me—I was a “nobody” in the fishing world. They felt an IGFA world record or two would legitimize my name. I accepted the challenge with the promise of free fishing as my reward.

What I didn’t expect to find in chasing IGFA world records was the pushback and negativity that would come my way. While I, and those around me, were ecstatic when I finally landed that first world record—a 32.58-pound red drum on 16-pound tippet on December 1, 2012—the fishing industry community as a whole was not.

That holiday season, as my dad boasted of my accomplishment to anyone that would listen and the Outdoor Channel offered me a spot on “Buccaneers and Bones” as “Meredith McCord: World Record Holder,” the harsh comments began to come in from naysayers. I was surprised. I couldn’t understand what the issue was with record chasing.

To me, getting a World Record meant:

And, upping my angling prowess by:

The pursuit of an IGFA world record is a challenge, and one I was up for as I knew that with each fish caught and lost, I would become a better fly angler. Why, then, did some folks have a problem with this? Here’s what I know: Lack of information (ignorance) is the foundation of fear, distrust and anger. And here is what I found out: So many people, both anglers and non-anglers, are misinformed about what it encompasses to catch and submit a world record fish. So, I present to you:

The Top 5 Myths About Record Chasing

Before diving into my next few points let me say that when pursuing records, the angler must come prepared, educated and explicit in sharing the rules with his/her guide or fishing partner. The more both parties are prepared and know what needs to be done in terms of rules and documentation, the quicker the process can happen and the quicker the fish can swim off, rested and ready.

Before we get into the nitty gritty, let me address the first concern people bring up about record fishing. The biggest pushback I have received is due to this misnomer: Dead or Alive. This myth begins, fairly enough, with the way World Records first started.

The IGFA started keeping records after it was founded in 1939. They later took over freshwater records and fly records in 1978 from Field & Stream magazine, a club called The Salty Fly Rodders, and the International Spin Fish Association for “offshore” species and other large species. The only way to get accurate weights of these fish was to “bring them in.” Conservation and catch and release back then were not what they are today. But truth be known, nowadays you do NOT have to kill a fish in order to catch an IGFA world record. The IGFA rules state: “The fish weighed only at sea or on other bodies of water will not be accepted.” This translates to: The fish must be weighed on land or standing on a sand flat, submerged rock or reef, river bottom or even something man-made attached to the ocean floor, such as an oil rig or drilling platform. It is the old practice of chasing off-shore records that gives rise to the thought that all record fish need to be killed.

Each angler has the option to pursue the records they want to chase, and I choose to chase fish I can release. Being a primarily catch-and-release angler, I choose to pursue records in which I can weigh fish quickly near where I land them and then send them off. Almost all of the fishing I do is inshore, on lakes and on rivers near flats, land, banks and so on. But I’ll be honest, not all of my personal world record fish have been released. A few record fish (tuna, walleye, snapper) have indeed ended up on my dinner plate. However, 95 percent of my 198 records have been released alive. That is over 185 of my world record catches released alive and well.

Now on to the nitty gritty. This myth refers to the belief that you have to pull the fish out of the water for measurements. The IGFA requires anglers to document the catch by three measurements: two lengths (nose to the fork and nose to the tip of the tail) and the girth. Nowhere does the IGFA state that you must remove the fish from the water to do so. It’s actually much easier for me (and better for the fish) to get my three measurements while the fish is in shallow water (using a net/sling).

I’ve found when chasing my bigger fish records, such as northern pike, muskie, golden dorado and alligator gar, a long 5-foot mesh sling provides me a great way of keeping the fish wet, breathing and yet secure from swimming off. Similarly, a large net can do the same for my smaller record catches, like rainbow trout, brown trout and a variety of bass species. While on the flat, river’s edge or lake’s bank, I lay the net/sling flat in the shallows, ensuring the fish is flat and quickly get the three measurements. This, as I mentioned in the beginning of the article, goes best when my fishing guide/partner knows exactly what images are needed to document the catch. A photo is required of the angler and fish (ideally with the rod/reel used in the catch). Again, the fish can be kept wet during this shot.

Nope. Speaking of nets and slings, there is NO need to hang a fish from its jaw, gill, or tail with a Boga, hook, gaff, rope, noose, etc., when the IGFA allows for all catches to be weighed in a sling or net. The IGFA simply suggests that you take a picture of the net/sling weight on the scale and then deduct that from the gross weight to calculate the fish’s weight. Super simple. If the gross weight of the fish in the net is 22 pounds and the net alone weighs 2 pounds, then it is deduced that the weight of the fish is 20 pounds. I weigh my net and sling before the fishing begins or after the fish is released. (If using a net or sling, a picture of net should be submitted along with a picture of the scale). Please note, the weighing of the fish is the only time the IGFA requires the fish to be fully removed from the water. The quicker your partner captures the photo, the quicker that fish is back off to the wild.

Now, I will openly admit that growing up as a conventional lake and saltwater angler, I was no stranger to gaffs and Boga grip scales. As a child, I have numerous pictures of me standing with my grandfather, dad and others holding beautiful specimens of muskies, pike, speckled sea trout and bass by the lip or gill. Even my first several world records—as my upbringing ingrained in me—I weighed those fish “incorrectly.” Luckily, I had wonderful mentors (some even IGFA staff members), who kindly encouraged me to think about not hanging the fish. Remember, the IGFA’s mission is one of conservation. Thankfully these great conservationists, scientists and friends help me to understand the better way of doing things.

Fight ‘til the Death?

So now that we have addressed what happens once a world record fish has been landed, let’s address another myth that catching records means putting undue stress on a fish by fighting it too long with light line/tippet. To be clear, “the IGFA is a non-profit organization committed to the conservation of game fish and the promotion of responsible, ethical angling practices, through science, education, rule-making, record keeping and recognition of outstanding accomplishments in the field of angling.” Those ethical angling practices mean giving fish a fair chance in the fight.

I am personally going to counter this criticism with fact. My average fight time for all my world records (that is 198 of them) is under five minutes. I am going to challenge those who come after me or the IGFA with this claim of “fish abuse” to really analyze what the true cause of unnecessary long fight times truly is: poor or inexperienced angling skills. Harsh, but true. I have seen strapping young anglers fight a trout up and down a river for 20 to 30 minutes on 4X tippet without knowing the true pressure they can apply to that fish to get it in and released.

At the same time, I have witnessed tarpon anglers spend hours landing a tarpon on 50-pound straight fluorocarbon, when IGFA states ethical angling practices say no more than 20-pound tippet should be used. This allows the angler to break a fish off should a shark come in for the hunt. These are true ethical angling practices. I am not saying we shouldn’t enjoy playing a fish, but we owe it to them too, to land them in a reasonable amount of time and get them back swimming again.

No Fun at All

Some have said, “Meredith, you are missing the point of fishing, you take all the fun out of fishing by chasing records.” To each their own. I’ll compare it to running. Everyone out there runs for a different reason. There is no right or wrong reason. Some run to clear their heads, some run to exercise, some run because it makes them feel good to set a goal and obtain it, while others run to flat-out compete. I like to do it all. I love fishing as a pastime and to clear my mind, as the hunt and pursuit brings my brain to the moment at hand. I also love hosting trips to teach and inspire others, and, of course, partnering up with guides to compete and chase records. I love and do it all. Of all my time on the water, only about 20 percent of it is spent chasing records; but I enjoy it and absolutely get a thrill from the challenge. If you doubt it, go and look through my pictures and tell me… is that a face of someone not having fun?
Find more of Meredith at https://meredithmccord.com

Register to watch Meredith’s live webinar on Wednesday, May 6th!