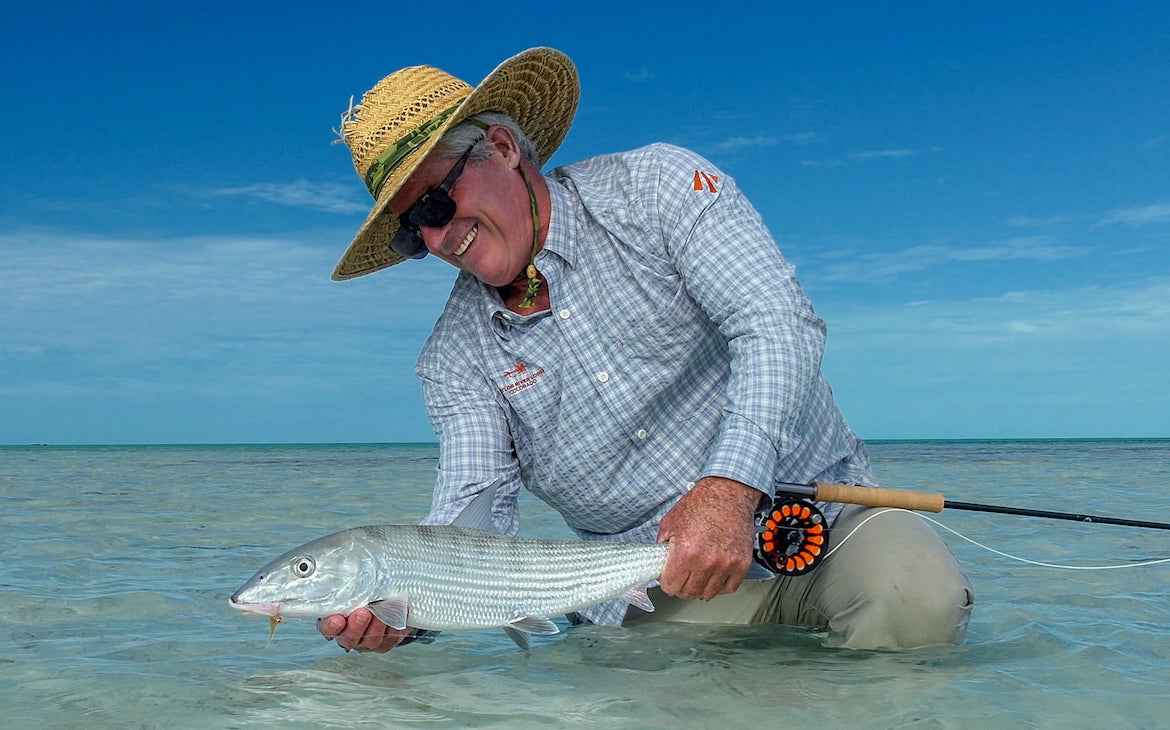 Brian O’Keefe is one of the most well-known names in fishing photography. His photography stems from a lifetime of fishing and adventuring. On this episode of Anchored, Brian and April discuss his evolution as an angler, photographer, world traveler, and fishing industry sales rep. You won’t want to miss out on hearing his travel stories. Listen in to hear what world travel was like before the internet.

How did Brian get into fishing?

Brian was born in Bellevue, Washington and grew up between Washington and Oregon. He was lucky enough to be born into a fishing family. His mom, uncle, and maternal grandparents were all anglers.They even fished New Zealand back in 1951!

His grandfather used the traditional English style of fly fishing and taught him form first. He was so strict that Brian spent a year casting in the yard before he was allowed to hit the river. When he was finally allowed to cast on the water, it was on the legendary Blackfoot River.

His grandmother was a biologist who taught him a healthy respect for nature and his art teacher mother encouraged him to follow his interests rather than settle for a traditional career. With this type of upbringing, it is no wonder that he has led a life full of adventures.

When did he first pick up a camera?

Brian’s first camera was a Kodak Instamatic. He first started using it to prove to his family that his fishing stories were true. Being the second child, he had a knack for telling tall tales. His mom praised him on his artistic skill which was enough to keep him interested in the hobby. He was quite proud when his pictures were published in the Fishing and Hunting News publication while he was still in high school. He enjoyed photographing nature and the fish he caught and found this to be a great way to combine his love of fishing with photography.

New Zealand and Australia provided a year of adventures

Upon finishing high school, Brian chose to travel the world before heading off to university. He saved up all his money in high school in order to fish New Zealand. After overstaying his visa he was kicked out of the country and shipped off to Australia. We’re not sure which was scarier—his flash flood escape in New Zealand, getting robbed by convicts in Australia, or fighting fires in the outback. Listen in and decide for yourself.

Brian’s life was destined for adventure after all of his pre-university travels. It’s no wonder that he never chose to settle for a desk job. After dropping out of university, Brain became a guide in Alaska until he was 30. After his 30th birthday, he decided to switch gears to become a sales representative for Orvis and other fishing retailers.

His travel stories are amazing; you won’t want to miss a minute of them. Press play to hear them all.