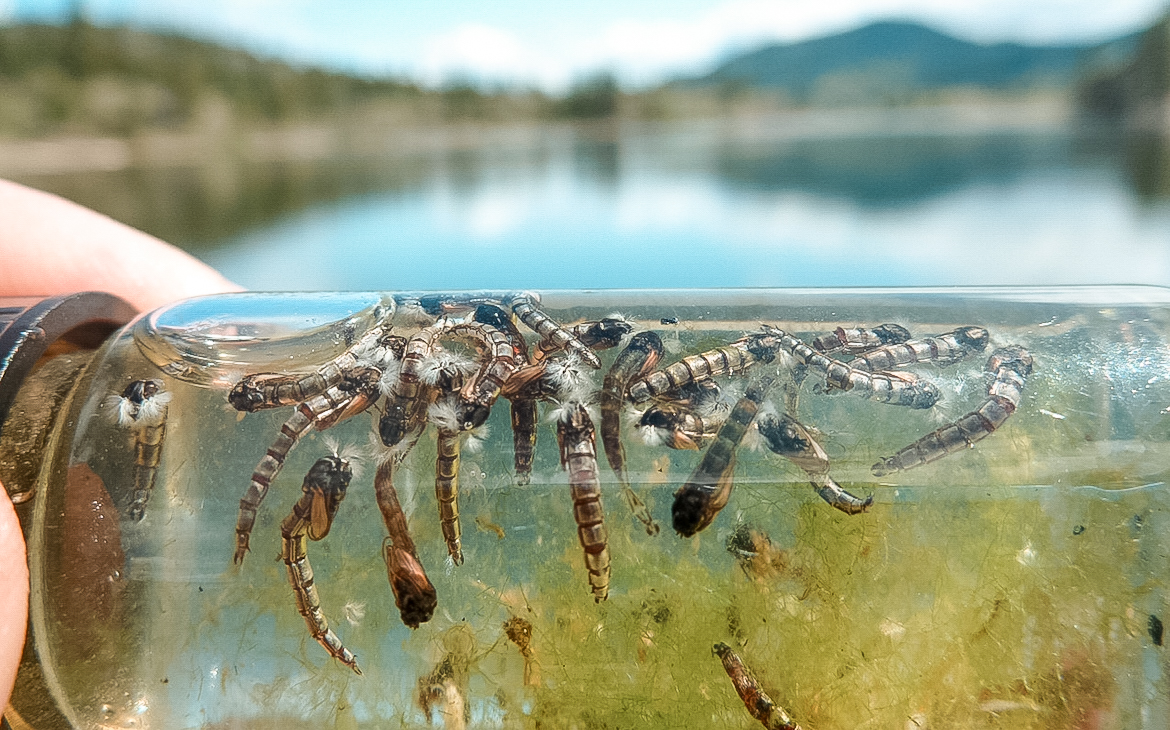 Each year I meet more and more anglers who are just starting their journey into fly fishing lakes for trout. Many are long-time river anglers simply looking to broaden their fishing horizons while others are fishing for the first time and have been intrigued with fly casting and catching fish with flies. At some point almost all stillwater anglers come to appreciate the tremendous diversity of opportunities offered by fly fishing in lakes.

Approaching lakes is often considered a daunting task to many anglers, as they are now facing what appears to be a featureless body of water. There are no immediately obvious landforms to help one determine where to start fishing and with what flies. The familiar riffles, runs, pools and flats of favorite trout rivers and streams are nowhere to be seen. Thoughts of trolling around a black Woolly Bugger come to mind as the only way to have success. In reality, learning how to successfully fish lakes for trout or any other freshwater fish species comes down to having a basic understanding of lake ecology. This includes structure of a lake, seasonal changes in water chemistry, aquatic invertebrate life histories and the biology of the fish species being targeted. These topics may sound like a university-level course but they are actually easy concepts to grasp when you think of them from a fish’s point of view.

The typical trout lake has a mix of shallow and deep water. Those lakes with abundant shallow water areas are often the most productive in terms of growing trout. That’s because the shallow water areas allow the energy of photosynthesis to reach the lake bottom and provide the basis for the production of aquatic green plant life. This lush underwater plant growth provides habitat for many of the common insect and other invertebrate food sources of trout. It also provides cover for both juvenile and adult trout as they forage for food. In biological terms the shallow water areas of a lake are referred to as the littoral or shoal zones and they are typically defined as those areas where the water is less than 25 feet in depth. The littoral zone is the major grocery store for trout. It is home to all the major trout food sources including scuds, midges or chironomids, mayflies, damselflies, dragonflies, caddisflies, leeches and forage fish. When you look at some of the most famous stillwater trout fisheries found in North America, South America, Tasmania and elsewhere, they will invariably have two things in common: abundant littoral or shoal areas and nutrient rich water.

The transition from the shoal to the deeper or mid-water parts of the lake is known as the drop-off and it can be very gradual in slope or sharp, quickly dropping off into deep water. The drop-off zone is an important area not only for trout feeding, but also as a source of refugia during warm summer months when the shoal areas are too warm during the day for fish to feed. The drop-off zone is cooler and better oxygenated, and also provides cover from predators.

The deepest parts of the lake are referred to as the deepwater zone. There is no rooted aquatic plant life in this zone as it is too deep for photosynthesis to produce green plant growth. Prime food sources found in this zone are zooplankton such as Daphnia and some deepwater chironomid emergences.

Like all fish, trout are cold blooded and thrive in cool, well oxygenated water. The littoral or shoal zone of the lake is their prime feeding area as long as water temperatures remain cool enough to support adequate oxygenated levels. Extensive feeding occurs on the shoals during the spring to early summer months and then again in the fall. In many small, highly productive lakes the shoal zone can become too warm during the mid-summer months for trout to be on them during daylight hours. However, once the sun is off the water the temperatures cool and oxygen levels increase, allowing the trout back into shallow water to feed through the night.

Overall, the most productive trout lakes, those waterbodies that have a reputation for growing large fish, are often landlocked or have only seasonal stream flows. The water is nutrient rich, which supports a large diversity of invertebrate life and there is an abundance of littoral or shoal water. These lakes are stocked on a regular basis, often with triploid or non-reproductive fish and managed with regulations designed to achieve a specific population number and size range of fish.

A lot of anglers have a hard time believing that trout living in small lakes can grow big by eating miniscule aquatic insects and invertebrates. But they do, and often to double-digit proportions. Like all animals, a trout will expend as little energy as possible in obtaining their food. Nutrient-rich lakes provide incredibly abundant sources of protein that can be found throughout the water column. Trout can gorge on quality food items such as zooplankton simply by breathing and filtering these almost microscopic organisms through their gill filaments or they can slowly cruise through the shoal zone plant life and pick off scuds, damselfly nymphs or leeches. Feeding becomes even easier when there is a major insect emergence such as chironomids or mayflies as the trout become extremely focused in their feeding behavior.

The next step in becoming a proficient stillwater fly fisher is taking the time to learn about the various insect and other invertebrate food sources that dominate the diet of trout. This information is easily accessible online or through instructional videos and apps. Key learning points include identification of a food source during its various life stages, common colors, sizes and in the case of aquatic insects, what their emergence process entails. As an example, chironomids emerge in extremely large numbers and over a prolonged period of time. They are the most extensive aquatic insect hatch occurring in stillwaters. The mature pupae emerge out of their old larval cases that are found in the benthic matter at the bottom of the lake. The pupae slowly rise vertically to the surface of the lake to complete the transformation to the adult life stage. This pupal ascent could be happening in 6 or 65 feet of water. The emergence sequence is the same regardless of depth. Trout simply inhale the helpless migrating pupae. Understanding the emergence process then allows the angler to employ specific fishing techniques to fool the trout into biting pupal imitations.

All aquatic insect hatches are driven by water temperature. Each insect order requires a certain amount of thermal units of heat in order to complete larval, nymphal or pupal development. In lakes, the first insect hatch of the season is always chironomids. This is followed by mayflies, then damselflies, caddisflies, dragonflies and finally mating and swarming flights of water boatman and backswimmers. Rivers experience a similar emergence sequence that we commonly refer to as hatch charts.

As previously mentioned, there are ample educational resources found online and in books to help you learn fly-fishing tactics for all the major trout food sources. There are also some very good books that provide excellent information as well as diagrams and photographs of the various life stages of each food source. I highly recommend Aquatic Entomology by W. Patrick McCafferty, as this book is written from an angler’s perspective. It covers all the aquatic insects and other invertebrates found in lakes and rivers. The New Field Book of Freshwater Life by Elsie B. Klots, is another handy reference guide covering lake ecology, entomology and plant life found in and around lakes and ponds.

Fly-fishing for trout in stillwaters will provide you with a lifetime of angling memories. Today, more than ever, there are many learning resources to guide you in your new-found fly-fishing journey. And the best part is, there are many thousands of small trout lakes found throughout the world waiting for you to enjoy.