Home » From Top to Bottom: A Look at Sinking Lines (Part Two)

From Top to Bottom: A Look at Sinking Lines (Part Two) 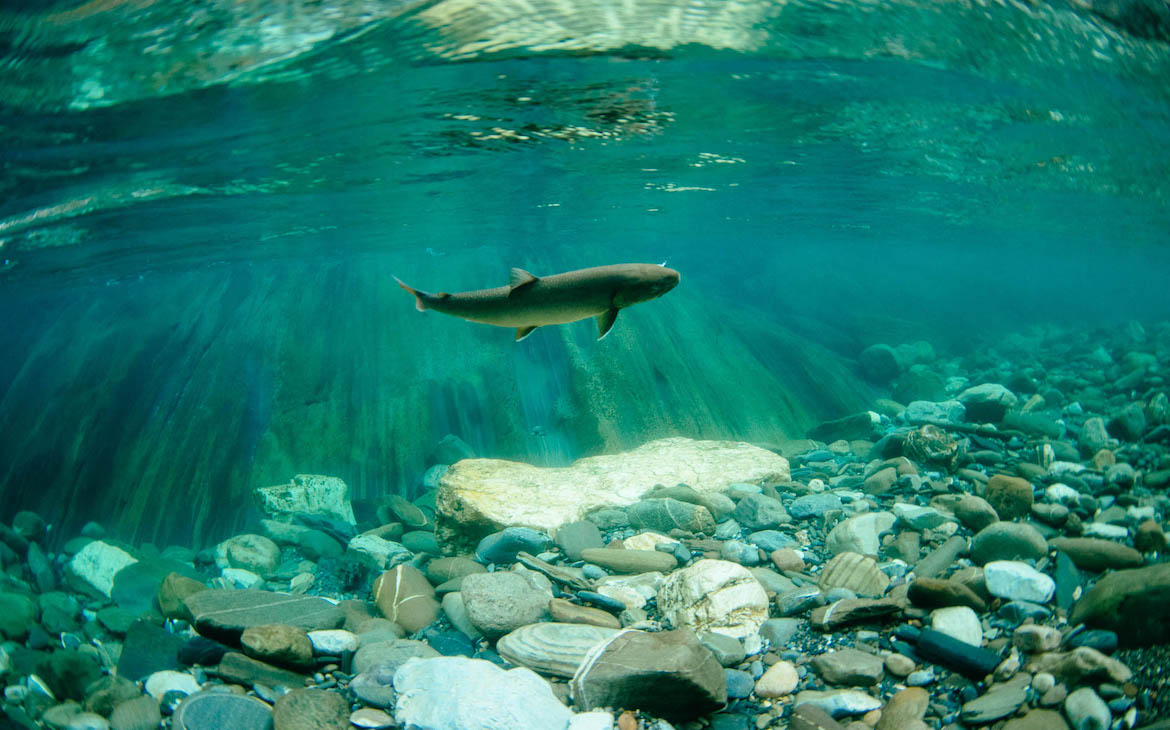 In Part One, we took a closer look at sinking lines and their history, applications and general composition. Now it’s time to explore the two most popular sinking lines sold today: integrated shooting heads and full-sink fly lines.

These lines are made to quickly load and shoot with ease, allowing anglers to cover water swiftly and efficiently. Some integrated shooting heads are designed to fish high in the water column, while others can reach significant depths. They’re able to turn over flies powerfully, as well as hold depths on a rapid retrieve, making them the perfect tool for streamer fishing.

The heads on integrated shooting heads aren’t long, typically averaging only 25’ to 30’. They’re sold at different grain weights to cover several line weights. The weights of these run from 150 gr. to over 500 gr. and the heads can range in density from floating to fast-sinking.

These are probably the most versatile of sinking lines as they have such a wide range of use. Line cores and coating can be switched up to maximize performance in various water temperature ranges from cold-water trout to saltwater tropics. Combined with various densities and sink-rates, we can select a line tailored to a specific application.

The great thing about these lines is how easy it is to cast them far and with minimal effort. Once the head is out of the rod tip, there is no need to continue false casting. In fact, the cast will likely fall apart if you let too much line out because the caster abruptly goes from feeling the weight of the head to a virtually weightless running line.

Instead, once the head is out of the rod tip, it’s surprisingly easy to simply shoot the line on the forward cast and let the weight of the head carry the running line out. Incorporating a double haul will add additional distance, but most beginners work way too hard when casting these lines (until they trust the rod and head to do the work).

With a known sink rate, it is easy to count these lines down to a specific depth (within reason) where you want to present the fly. The maximum practical depth for these lines is around 30 feet. With the long head and thin running line, the fly will stay in this range for an extended period of time on the retrieve. Simple math shows a Sink 6 head (6 ips rate) takes 20 seconds for the line to reach a depth of 10 feet. This actually gives pretty precise depth placement of the fly—especially on stillwater or in areas with slow current. If current or boat movement is involved, this depth will decrease a little, but after a bit of experience with these lines you’ll get a feel for where the fly is.

We also see these lines used in true big-game situations. Built on extra-strong cores of up to 100 lb. breaking strength and heads up to 750 gr., these lines are made to tackle a variety of bluewater species such as sailfish, tuna, giant trevally, and marlin. They load heavy rods quickly and turn over the largest flies.

The last lines we’re going to look at are full-sink lines. Sinking lines have been around for over 100 years, as the original fly lines—made from silk—sunk when they got wet. These lines had to be dried and then dressed with a floating substance in order to fish on the surface, which is how they were generally used. There is very little in the literature mentioning early lines used to present flies below the surface.

We noted earlier that the first modern sinking lines, known as Wet Cel, were introduced in 1960. Here, the entire length of the line was made to sink below the surface. These were revolutionary because they were made in specific line weights and could be cast as a regular fly line. This opened up a whole new range of fishing opportunities for fly anglers.

Full-sink lines mean precisely that—the entire length of the line is made to sink below the surface. These can range from super-slow-sink designs made to keep flies in the surface film, to lines designed to sink rapidly and crawl flies along the bottom.

These lines are mostly used for lakes and ponds with little current present, although they’re often fished from a drifting or slowly moving boat. They’ve reached their present level of sophistication for use on the reservoirs of the UK and lakes of western North America where trout are the main target and anglers need a series of lines throughout the fishing season.

Many of these lines are quite specialized. For example, “hover” lines stay in the film, suspended just below the surface to keep flies in “the zone”. They may be used to fish floating flies to minimize the drag created from being pushed by the wind. This helps keep the fly floating naturally.

There are also lines where the full length of the line is clear to reduce visibility and give a super-stealthy presentation. These clear intermediate lines can be a game changer on clear, calm, flat water, turning reluctant fish into active feeders. They also have applications for other types of fishing such as stalking carp on shallow flats.

The early full-sink lines were a single density, and a fast-sink version tended to sag from the rod tip creating slack and reducing the ability to detect strikes and get a good hook set. This problem was addressed by the introduction of multiple-density lines. These lines are densest (sink fastest) at the tip with less density at the mid-section and back end. The goal is to achieve a straight-line connection from the rod tip to the fly with minimal sag. This improves bite detection and allows for a better hook set when a fish hits.

These lines have two or three density changes in them, and the premium versions have a graduated change between densities to eliminate hinging when being cast. They are offered in slow-sinking to fast-sinking versions. As with the integrated shooting heads, a countdown method can be used to keep the fly in the desired fishing zone. Once again, we will put the practical depth range to around 30 feet.

There are also situations where the fly needs to be crawled just off the bottom. Here, the fastest sinking section may be in the middle with a lighter density at the tip. This keeps the fly off the bottom, visible and away from weeds and debris. If fished mid-depth, this type of line gives the impression of a critter swimming towards the bottom, which is often a great strike trigger.

Over the years these lines have become quite sophisticated. Some manufactures have added “hang markers”, which are there to tell the angler how much line is out. This helps to gauge fly depth and indicates when to pick up and cast again. For many, these lines are a key tool for having consistent success on the water.

There are various leaders and tips that can be added onto conventional lines to take flies below the surface. Poly leaders are short, polymer-coated monofilament leaders available in different densities. Though designed for swung-fly use, they can also be added to single-hand lines to get the fly a bit deeper on the retrieve. These do not significantly increase the line weight for casting as long as they are used with a 7-wt or heavier line.

Some of the tips made for Spey lines can also be added to single-hand lines. Here we need to be aware of the grain weight of the tip being used so we don’t overload the rod when casting overhead. For example, the manufacturer standard for an 8-wt. line is 210 gr. If we add a 10 ft. Scientific Anglers TC Tip that weighs 120 gr, we are 330 gr. total (which is more in the range of an 11-wt. line for overhead casting). In most cases, this is too much for our 8-wt. to handle

Adding tips is best done with heavier weight rods (8-wt. and above) to give some added versatility if needed. You can quickly adjust a line with the addition of a tip if you don’t have a suitable sinking-tip line. While this is the norm when it comes to two-hand lines, it is outside the box with single-hand lines.

Similarly, a short floating tip can also be added to a sinking line to work a fly just off the bottom or keep it above weeds. In any of these applications, casting may be compromised a bit as these tips will likely hinge when cast overhead. However, this is not a permanent set up, rather it is a quick solution to a problem that needs to be addressed at that time. Whenever you are on the water, it pays to be flexible and adjust to the situation you are faced with.