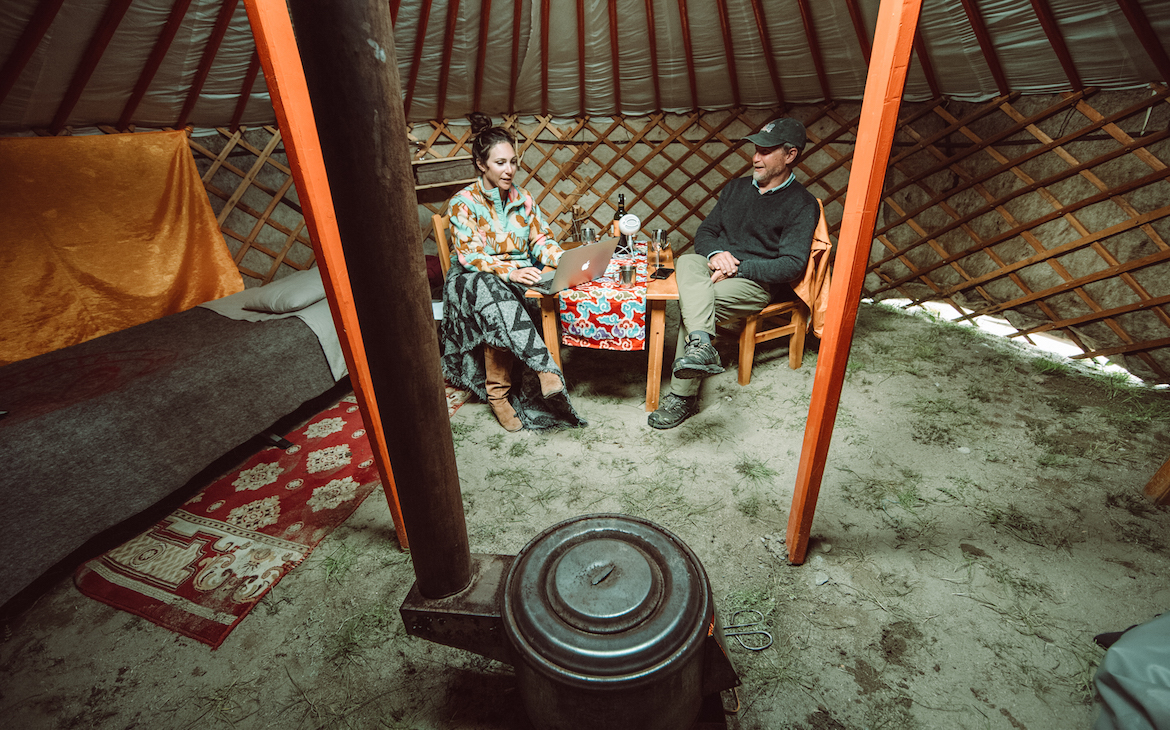 The green audio waves of my recording software pitch as the fire crackles and snaps beside us. I wonder briefly how I’m going to edit out the noise, but my concerns are quickly overtaken by Mark Johnstad’s charisma and jovial smile. He finds it amusing that I’m so interested in his history; quick to derail any thorough questioning, ya-dee-ya-da’ing through his intense climactic story arc. As so many of my podcast guests do, he warns me that his story isn’t really all that interesting—that is, until we start to piece together his timeline. As the wine flows and the fire spits, I get the feeling that even he can see his accomplishments are truly special.

Though technically born in Minnesota, Johnstad is from Montana. Since he was two years old, the vast and wild landscape of Montana has surged through his veins, thoughts, and fantasies. He’s the son of an outdoorsman, and hunting and fishing played a major role in his upbringing. Now, as a father himself, he passes along the same knowledge to his son, Cooper.

He has an animated way about him, though it’s hard to tell if he’s this way in the absence of children or red wine. In our short time together I’d never seen him away from either. We were on an eight day float trip with his fishing operation Mongolia River Outfitters, and spirits were running high. The fish were biting, the weather was cooperating, and the giggles between Cooper and Dave McCoy’s young daughter, Nessa, were contagious. Occasionally I caught a glimpse of a straight-faced Johnstad speaking to conservation officers and staff, but such seriousness was brief and temporary. I had expected him to be different. Admittedly, I was guilty of assuming that a man with such impressive credentials would be a little less… likeable. He was welcoming, funny, and about as quick-witted as anyone I’d ever met.

I suppose none of this should be surprising considering the yin and yang of Johnstad’s past. At college in Minnesota, he majored in English literature and minored in Middle Eastern studies. During his sophomore year he attended school in Jerusalem, and completed his senior year at Cambridge University. After graduation, he shucked fish in Alaska, ski bummed in Vail, worked horses in New Mexico, and traveled to Central America in pursuit of untapped fisheries, but his passion for classic Montana remained the same.

After seeing the changes that were taking place in his beloved Montana, he decided to study environmental law in hopes that he might have a hand in conserving the last vestiges of the wild. Such ambitions required an advanced degree, so he enrolled in law school.

The institution and accompanying stresses of student loans and deadlines drove Johnstad to explore one final “hurrah” before committing to yet another few years of academics. A friend told him about the vast terrain of Mongolia and its undeveloped landscape that was, in many ways, similar to Montana.

It was the year after the Berlin Wall came down, the Soviet Union was collapsing, and Mongolia, though inhabited by nomads untouched by the modern era, was beginning to open up to Westerners. Johnstad dreamed of nomads untouched by the modern era, and he dreamed of riding a horse east to west across the country. He visited the library to see what he could learn, but the Iron Curtain ensured reading material was scarce.

Eager to commence his trip, Johnstad and Minister Batjargal discussed the future of Mongolia. They were aware of the potential exploitation that could ensue if they didn’t have some protective measures in place: poaching, mining, forestry, commercial development, and all exploits in between.

The Chinese aphrodisiac market had already put a dent in big-game numbers, dropping a herd of 200,000 elk to a mere 20,000 in the space of ten years. At the time, the Mongolian government already had 13 protected areas, but it was their intention to expand. Johnstad, likeable, knowledgeable, and adventurous, was the perfect candidate to help them achieve this goal. They funded him to visit various parts of the country to see which parts of it should be classified as protected zones.

The fire in the ger has been stoked, and the bottle is getting low. I’ve since stopped watching my computer. I’m so enthralled by our conversation, I forget that I’m recording it all. I’d heard that Johnstad was “the guy” to talk to about the fishing industry in Mongolia, but this was next level.

I continued, “So when you came in to do all this conservation work…”

He interrupts me, “No, I came here to ride horses across the country and got looped into doing conservation work.”

Looped into it he may have been, but they sure lassoed the right cowboy. Johnstad fulfilled his dream of riding across the country, and spent three and a half months riding his horse to the border of Kazakhstan. He fished along the way. He got a job working with the United Nations and lived in Mongolia from 1993 to 1995, when his love for the country first blossomed.

Johnstad eventually finished law school and then went to work as a consultant for the UN, USAID, and the World Bank designing and implementing major conservation programs. In the late 1990s, he ended up in Africa helping local communities conserve biodiversity through sustainable tourism and resource use. The German government asked Johnstad to return to Mongolia to try and get something similar off the ground. That effort didn’t progress as Johnstad hoped, so he decided to just try it on his own.

An international rush toward mining in Mongolia brought people with loads of cash into the country. Newly rich urban Mongolians and unscrupulous foreigners with too much money—and not enough sense—took up fishing. They were killing large numbers of taimen, often with the help of local “guides” paid with a couple bottles of vodka.

Taimen simply can’t handle aggressive retention rates. They take seven years to reach sexual maturity and can live up to 50 years. In the best of times, taimen are few and far between. Rural communities and the government of Mongolia desperately wanted help.

“Taimen exist on a scale much different than your normal trout species. These are huge apex predators. They have enormous home ranges and require large, pristine watersheds to survive,” Johnstad explains.

The plan? Use fly fishing as a catalyst for conservation. Johnstad teamed up with some Mongolian friends to found Mongolia River Outfitters (MRO). They started small, slowly building up the operation to gain the trust of local communities and the global market. At first, MRO was just Johnstad guiding a couple of guests supported by a skeleton camp crew. Twenty years later, MRO is now a world-class fly-fishing operation with over a dozen international and Mongolian guides.

Their float/fish programs link a complex of 28 cozy fishing camps that collectively protect nearly 625 miles of coldwater fisheries. These rivers are designated catch-and-release, fly-fishing-only with stream-side setbacks, motor prohibitions, and a cap on total anglers.

MRO has partnered with The Nature Conservancy, World Wildlife Federation, BioRegions International, The Taimen Fund, and companies including Costa, Patagonia, Orvis, and some of the world’s most prestigious booking agencies to quietly create one of the globe’s most innovative fisheries conservation programs.

Everything MRO does is designed to incentivise community-based action. Almost all of their 60+ staff members were raised near the rivers where MRO fishes. Every one of them is now a grassroots taimen conservation advocate.

All international anglers must arrange their trips through MRO. Domestic anglers must secure a license through local fishing clubs. These same anglers who once killed taimen are now accompanied by a representative who makes sure the catch-and- release rules are followed. All the permit fees are distributed to local communities to support taimen conservation.

MRO has built shelters for staff in protected areas, helps with programs to enhance arts and culture, funds scholarships, and supports established eco-programs in local schools. MRO and their Mongolian guides also help sponsor national fly-fishing contests. And with the University of Nevada, Reno they are engaged in important taimen research, including a genetic study where our group contributed quite a few samples!

I recently watched One Path: The Race to Save Mongolia’s Giant Sal- monids, a Fly Fisherman documentary that premiered on the Outdoor Channel. In the film, Johnstad organized a wellness clinic where angler/volunteers provided 150 children with free dental and health screenings in a single day. It’s just one example of how Johnstad’s vision always benefits the local people, who are in effect the real guardians of the river.

And his vision is already paying off. MRO’s rigorous catch records show that every year these protected rivers deliver more and bigger taimen.

“It’s definitely a work in progress,” smiles Johnstad. “But we’re getting there.”