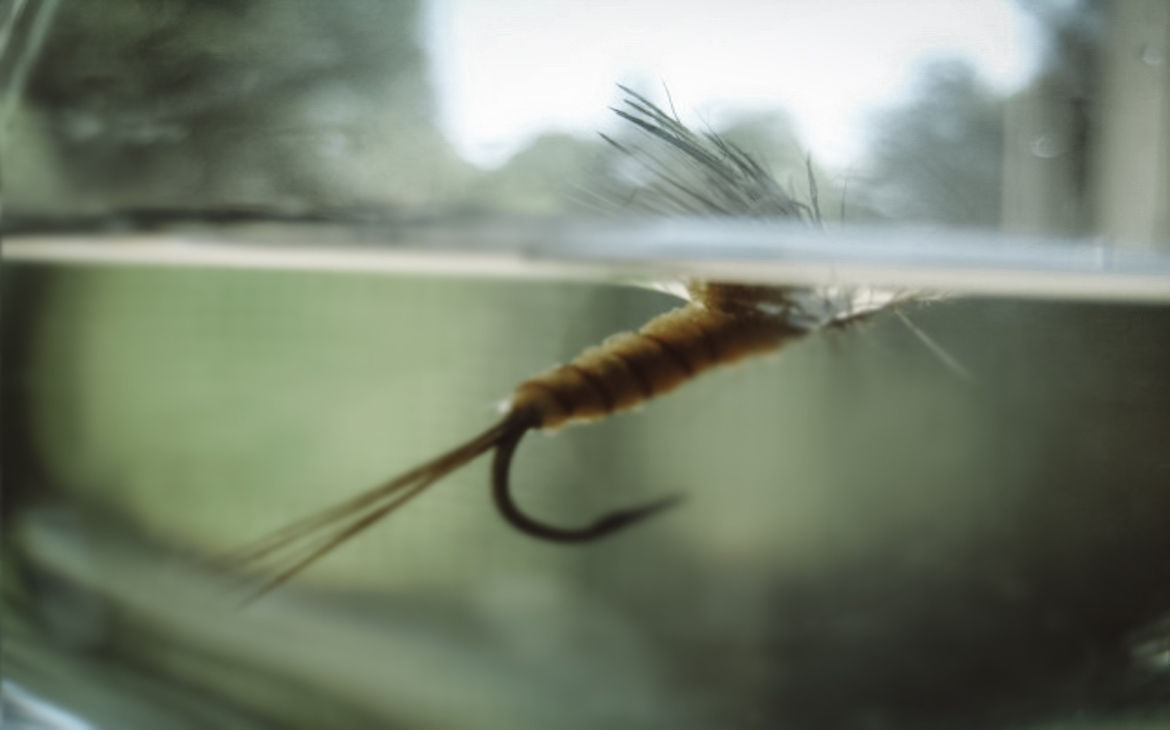 Most trout anglers start with the basics of technique: learning how to cast accurately and make a convincing presentation. Then, after acquiring this basic knowledge and perhaps finding success fishing classic flies such as the Adams, Hair-Wing Coachman, Humpy or Goofus Bug, many anglers then search for additional knowledge of techniques, fly patterns and trout behavior to enhance their angling experience. Over the 50 years I have enjoyed this sport, I have had many opportunities to learn new things, all of which have added pleasure and insight to my angling.

In the late 1970s, while fishing a Green Drake (Drunella grandis) hatch on the Henrys Fork of the Snake River in Idaho, I noticed that the rise to the natural was often not what I recognized as a normal take on the surface. The rise was there, but the insect had not shown itself clearly. It appeared that the fish were taking bugs just in, or under, the surface. I took a nymph pattern that was about the size of the insect, and was tied on a light wire hook, dressed it with floatant and fished it almost dry. The reward was several sizeable fish.

That was the beginning of an awareness that would answer many questions related to rise forms and trout feeding behavior. From that time on, I looked at hatches differently, with a thought as to what is going on underwater, in the surface film and on the topwater. I fished that floating nymph with occasional success, which made me think of the numerous times when fishing big hatches such as the Eastern Green Drake (Ephemerella guttulata), White-Gloved Howdy (Isonychia bicolor) or Cream Variant (Ephemera varia), where I found fish, although feeding, were reluctant to take a traditional high-riding dry fly. I specifically recall several consecutive situations that confirmed my new observations: they were both during an Isonychia bicolor hatch within a two-week period around 1980.

My old friend Ernie and I found ourselves stumped during a reasonable hatch on the East Branch of the Delaware, where we presented dry flies to a fair number of rising trout, but caught only two. Five days later on the Beaverkill, the water was a bit high, but an occasional fish was rising on the surface. I saw several Isonychia adults floating down, but did not see any taken. After presenting a dry fly with no results, I fished the mostly-floating nymph to a rise and took a decent 15-inch brown. Using a 10cc syringe with a piece of surgical tubing attached to the needle end, I was able to gently pump the trout for a peek at what it had just eaten. And indeed, there were two Isonychia nymphs, wing cases split, with the wings partially emerged. Those bugs were eaten before they got out of the surface film, but probably just as they got to the surface, where they had hung relatively still and quite vulnerable. The following weekend on the Main Stem of the Delaware, we had a sparse multi-hatch situation, but the taking was difficult. Some of the rises were from sizeable fish, but only three fish of 12 to 14 inches took the several imitations we presented.

That night, I decided to tie several flies with a new silhouette, based on what I recently observed, closely matching the body and wing colors. On a 3X light-wire hook, I tied the body of the Isonychia nymph and formed a little tuft of wing, about half the length of the body, using a clump of dyed deer hair and a few soft legs hanging down. The deer hair was up at a 45-degree angle. I figured that would float the fly, while the nymph body hung under the water, resembling the nymph that had just swum to the surface and was in the process of emerging. With most of the fly under the surface, it is more visible to the fish than a dry fly on top, and very vulnerable.

The following evening, the same hatch scenario developed, but this time, we took about eight fish from 13 to 20 inches on that fly. I named it the Floating Emerger, or Flo-Merger. It performed as I had hoped.

Since that time, over 40 years ago, I have fished the Flo-Merger for many of the insects I tie to imitate. It is not equally productive for every hatch, but often does the trick, especially at the beginning of the hatch. I can tie the fly to float effectively down to size 16. The trick for those small flies is the right kind of deer hair for the wing. When fished, it is important to dress only the wing with a cream floatant, so that the wing floats, but the body hangs underneath the surface. (Try to use a material for the body that will absorb water and sink, such as wool.) If you use a liquid floatant, the entire fly will absorb it, and it will usually float on its side, defeating the purpose of the fly.

I have had numerous experiences where the Flo-Merger was successful. One that stands out, due to the venue and participant, was on the River Avon, in England, with the late Dermot Wilson, who was an authority on chalk streams and an early advocate of catch-and-release angling in England. He had invited me to fish his club water on the Avon during their Green Drake hatch, which is similar to ours, but much more accommodating, time wise. The adult hatches about noon, and the spinner from a previous hatch falls about two hours or so later.

As we started on the river, I mentioned to Dermot that I wanted to try a new fly. When he saw the Flo-Mergers, he commented, “No nymphs. You can only fish a floating fly on these waters.” I replied, “It floats on the surface, and I have an idea. When we see a fish rise, you present your dry. If the fish doesn’t take it, I will then present the Flo-Merger.” Dermot missed the first fish on the dry fly and took the second, but the next three rejected it. The Flo-Merger took two of them.

Dermot then gazed around with a look of guilt and asked, in his proper English accent, “Could I try one of them? But please don’t tell anyone about it.” He happily fished it downriver and reported later that he took several fish with it until a big one broke him off. Then in his wonderful humor, suggested that possibly, “the fly should not be allowed, as it is dangerous to the fish.”

I have a theory related to the Flo-Merger. Most of the large nymphs are swimmers and can move rather quickly. These nymphs swimming to the surface stimulate the feeding activity of the trout, and as long as it’s fairly light out, the fish can see laterally and will pursue these emerging nymphs. They will take many of them on the way up, but if the water is too deep, they may not get to the bug until it reaches the surface, at which point it pauses and goes through the hatching process. It is both visible and vulnerable at this time and can be taken easily. This is when the Flo-Merger is at its best.

However, as it gets dark, I believe lateral visibility becomes difficult for the trout. They may not be able to see these nymphs emerging from the bottom and must focus on the surface, where they can more easily see a floating dry fly against the lighter fading sky, and they will take that more readily. I have had numerous situations on different hatches where the dry was not as effective as the Flo- Merger until it was quite dark, and then the dry got better results. So observe and experiment—then press the “Save” button in your mind for future reference.