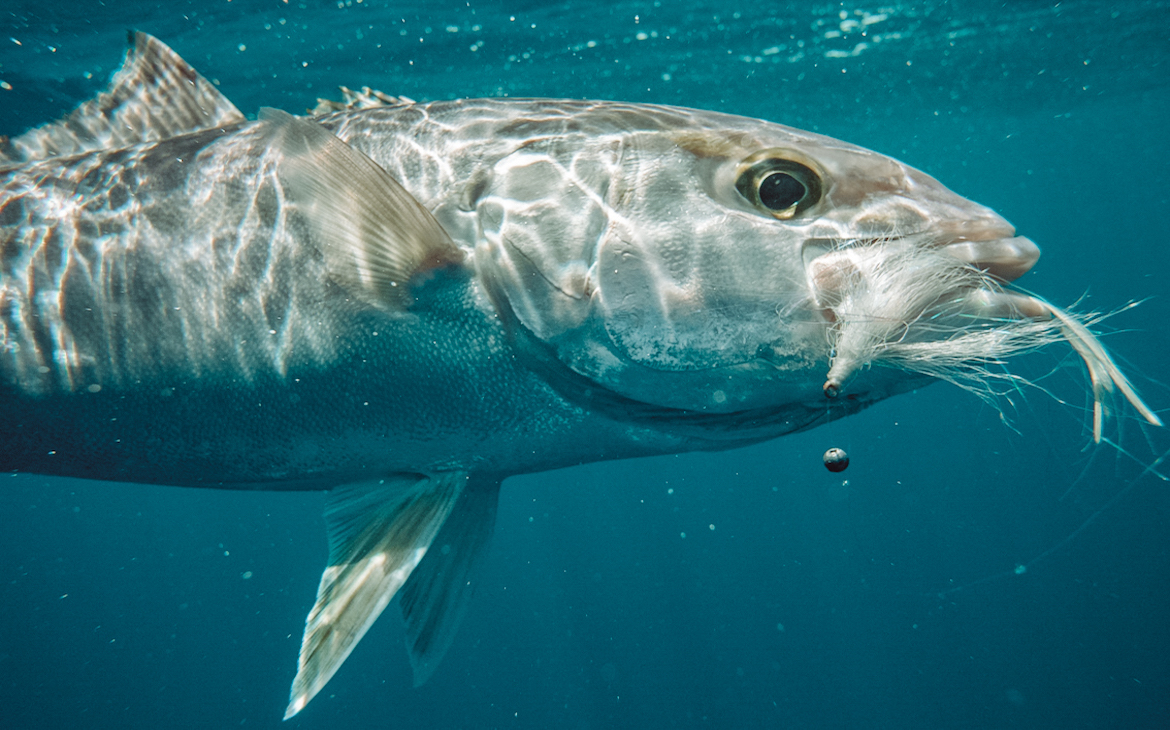 In his book, A Jerk on One End, art historian and keen fly angler, Robert Hughes, described the philosophical and psychological value of fishing as being akin to dropping a line of inquiry into the unconscious to see what monsters might be lurking there. Dredging contains these same values.

Dredging refers to blindly fish flies deep on fast sinking lines. It’s not the favored tactic of many; it’s thought to be artless and something that’s resorted to by those with no skill, or those who can’t see fish on the flats or make the required cast if they do. But it sure can get your arms stretched and your rod bent.

All anglers like sight fishing. But fish aren’t always in the shallows or on the surface, and some species never come into shallow water let alone visit the surface—does this mean they aren’t a legitimate fly target, should we just completely ignore them? I think of everything that swims as a legitimate fly target and sometimes we need to go to extremes to engage with them. And there’s not a lot that’s simple about effective dredging.

Let’s face it, good steelheading or salmon fishing is mostly just dredging, yet it’s the acceptable way to fish for them. Good swingers are also very thoughtful about what they’re doing as they control angles, mends, drifts and weights through the water. Many anglers look down on dredging, and it’s what most least like to do—that, “I only sight-fish with a dry fly old chap,” sort of thing. But I say to hell with that.

These days we have the technology to fish deep, GPS and depth sounders give us a remarkable view of the substrate and everything in the water column with astonishing detail, at considerable depths. It means we can use this equipment to “sight” fish. We now have low stretch lines that sink like a stone, we have the rods and reels to deal with big fish down deep.

In this game, tungsten and lead soon become your favorite fly-tying materials, and a small fly is tied on a 4/0 hook. It’s not the realm of IGFA leaders and wire is often a prerequisite, especially in the tropics. Being prepared to tie small ball sinkers into loop knots is also a big hurdle to overcome mentally.

My own fascination with dredging goes back to the days of fishing off Sydney with Gordon Dunlop using LC13 shooting heads for a variety of species, including amberjack and yellowtail kingfish. Over the years, I’ve never hesitated to send a fly deep if required, because it’s not rocket science to figure out that most of the time there are many more fish lower in the water column.

But this interest in fishing deep was really ignited one day when out of Perth, in Western Australia. I was part of a group of fly fishers were given a ride to chase samsonfish on a jig fishing charter boat with a bunch of jig fishers, and we were determined to get hooks into these fish using fly tackle regardless of depth. Samsons are closely related to amberjack and yellowtail. They gather in huge spawning aggregations off the southwest Australian coast often in around 100 meters of water.

I wouldn’t call what we did fly fishing, but we were fishing with fly tackle. Craig Radford brought along a small open-mouthed basket loaded around the open rim with heavy sinkers. He packed it with chopped pilchards and it was strung on a thin rope with markers every 10 feet. I had a 14-weight Sage loaded with the densest line available at the time, T14, and loaded up a 12-inch flashy profile tube fly with two 10/0 hooks and a great gob of tungsten putty under the chin.

The top of the school of fish was around 80 meters down in 100 meters of water and the jiggers were giving them hell and getting served right back as several rods exploded like firecrackers. Craig lowered and emptied the contents of the basket in a series of ascending drops from 80 meters and pretty soon the peak of the school came up to 50 meters. I had no doubt that if we could get the fly to the fish they would eat it so I sent the fly down.

Fortunately our drift on this particular morning was slow as there was little wind or current, and this is a key ingredient for what we wanted to do. I dumped the fly, the running line and armfuls of 50-pound GSP backing. When I figured the fly was deep enough I started to jig, cranking the backing onto the big reel. And then when I reached the running line I used a conventional retrieve. Bingo! It worked and we landed a trio of 40 to 50-pound samsons that morning before the wind got up. What fun it was.

Some years later, out of a barramundi lodge in northern Arnhem Land, where the tide windows in the rivers determine your day-to-day barramundi fishing, we dredged patches of deep rubble bottom offshore when the tide wasn’t right. In this location “deep” is between 30 and 50 feet, but these patches had seen almost no fishing pressure.

We had some pretty astonishing sessions out there on days when nothing showed on the surface but down deep over the reef it teemed with life and when you got the drift, the sink and the retrieve right, it was hang on tight time. There are so many willing fish down there it’s a lottery, but some are more prized than others.

Big fingermark (golden snapper) were always at the top of our agenda—you can catch plenty of these as pan sized versions in the rivers, but the big ones are all offshore, they pull like stink and are a real prize. The key was to get the fly deep and keep working it in that deep zone without getting hung up on the bottom. These days, lines like T11 and T14, in conjunction with RIO’s low stretch metered shooting line make that a lot easier.

Bite offs are relatively frequent as mackerel and barracuda are always lurking around these patches. The fish down deep also never had far to go to get to a rocky outcrop, and we went through a lot of flies at times. We also learned that bigger flies are not always the answer. Ross Italiano had some small (size 1/0) Clousers wrapped with plenty of lead and tied on hefty hooks that easily out-fished all the best squid flies, Deceivers and big Clousers. We had some great sessions on those reefs.

Craig Radford has been a fast-sinking shooting head angler for more than few decades. Cortland’s LC13 shooting heads and a variety of different running lines were as sophisticated as fly rigs got in Western Australia 35 years ago; I doubt there was a floating line to be found west of the Nullabor Plains. The mackerel species were most fly anglers’ targets. Dredging reef points and known ledges with a burley (chum) trail was pretty much standard technique, but they caught some great fish including other creatures that came up the trail.

Using readily available depth sounders, Craig and his son Adam have done amazing work fishing the depths off the Western Australian coast, targeting species such as the bottom-dwelling Western Australian Jewfish (aka dhufish). These are a deep water species that are prized as both a table fish and a sport fish. The fishery is tightly managed these days, but when it’s open, it’s on.

Craig and Adam are now down to targeting individual fish marked on the sounder, usually in water between 25 and 35 meters deep. You need low wind and current conditions, which enable a very slow drift over the marked fish. Other species also get in on the game: pink snapper, samsonfish and other reefies more usually associated with baitfishing and chunks of lead, are frequently encountered. One day we engaged with a big school of feeding samsons, yellowtail kings and amberjacks, and although the action started deep the activity brought them to the surface.

Episode #: 2 (click to listen)
Duration: 1 hr 24 min
Topics Discussed: Peter’s upbringing, views on shark conservation, Australia’s fishing industry and his television series that had an undeniable impact on the land down under.
Buy Peter’s Book and DVD’s: A Few Great Flies and How to Fish Them, Wildfish with Peter Morse
Bio: Mention Peter Morse to just about any fly fisher in Australia and you’ll immediately have their attention. Peter was one of the first people to pioneer fly-fishing there, and he shows no signs of slowing down. Peter is the author of three books and is a certified Master caster, television personality and well traveled angler.