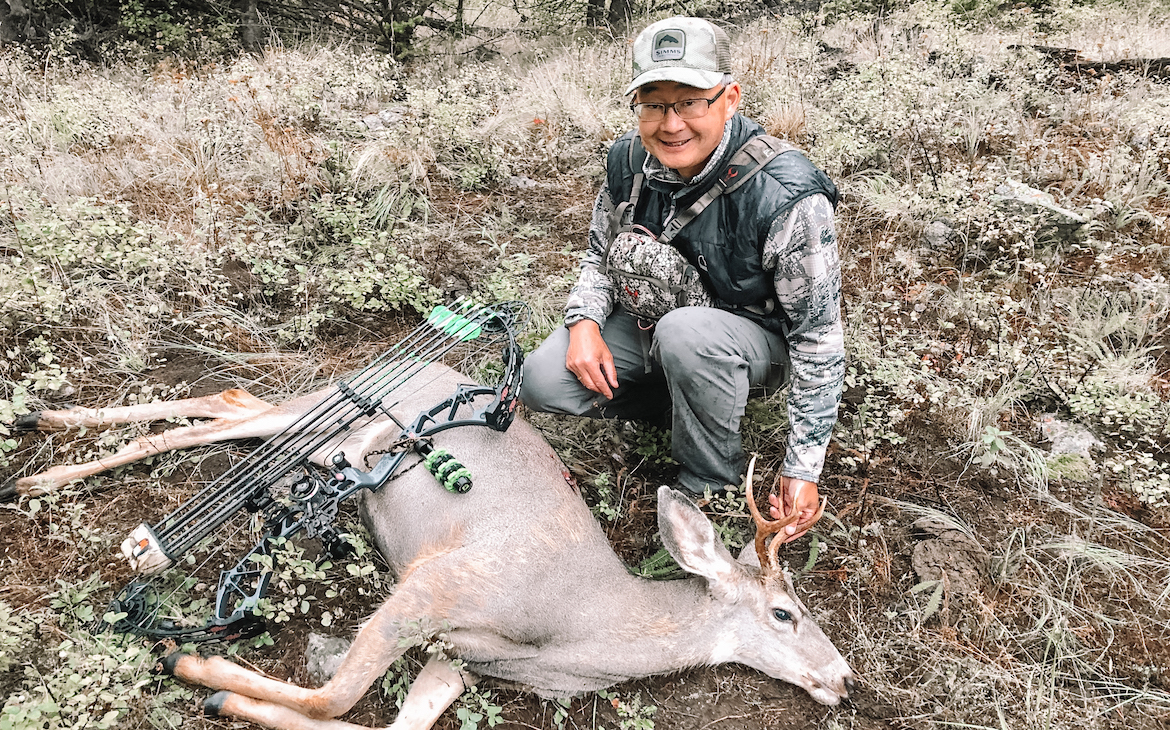 I was introduced to fishing at about the age of four when my dad started taking me out on the salt chuck in search of coho and Chinook salmon. Needless to say I became fascinated with fishing at a very early age. That passion only grew and by the end of elementary school I knew what I wanted to be when I grew up!

Fishing was my incentive to seek a career working with fish and I was incredibly fortunate to eventually become a fisheries biologist managing recreational trout fisheries for the province of British Columbia.

My first trout was caught on a big dew worm suspended under a plastic red and white bobber. I watched that bobber go down while standing in my gum boots on the shore of an urban Vancouver lake during a torrential downpour while my dad sat in the car reading his Popular Science magazine. And I can still vividly remember the first fish I caught on a cast fly. It was a black crappie hooked on a Black Gnat pattern that was part of a selection of basic flies my dad had bought me. That was almost 60 years ago but it was enough to send me on a lifetime journey of fly fishing.

Fast forward to just this past fall when I harvested my first archery deer. Another memory forever etched in my mind and often replayed while drifting off to sleep each night. Like fishing, and particularly fly fishing, I have been absorbed with all aspects of shooting and hunting with a compound bow and this has all happened in just the past 3 years. However, my passion for this new-found sport did not just come out of the blue.

Over the years I dabbled in deer hunting with a rifle as well as shooting (often not killing) at ducks and geese. There were a lot more deer back then and I was able to harvest a few mule deer. While these days afield were always enjoyable I always measured success as bringing home some venison or game birds. For so long I considered the hunting season to be conflicting with the fall fishing period, which was one of the best times to be on our local lakes. Given a choice I would almost always opt to go on a fishing excursion rather than a deer or moose hunt.

When I was about 10 years old my dad got me a fiberglass bow and arrow set and I remember doing some target shooting with my Boy Scout group as well. However, it was 50-plus years later before I picked up a bow again. My interest was piqued when I started watching a few hunting shows on a subscription based TV outdoor channel. The original reason for subscribing to this channel was to watch other fishing and particularly fly-fishing shows to see how they were shot and put together as I was still co-hosting a lot of shows. I remember watching a bow hunting episode where the hunters were doing a spot and stalk on mule deer bucks in southern Alberta. I immediately said to myself, “this looks very interesting.” I started recording the archery shows and was soon watching them while riding the exercise bike. Next came the internet and watching all kinds of YouTube videos on archery gear and bow hunting.

Coincidently, whitetail deer populations in our region of the province were increasing to the point where they were worth pursuing. My hunting friends shared their whitetail meat with me and while I always enjoyed a good mule deer this new-to-me venison was absolutely superb.

After a lot of research and talking to archery shops I ordered a bow and anxiously waited for it to arrive. Being left-handed made it very difficult to try any bows so I did not did not have the luxury of knowing exactly what I was buying. Fortunately, it turned out to be a great first bow.

It was an exciting day when I drew back on my new bow and let go of those first few shots. Then began that ever-so-steep learning curve. I found it both challenging and frustrating learning not only proper shooting technique but tying to grasp all the aspects of bow tuning, arrow selection and so on. It made me think about the frustrations that beginner fly fishers have when learning how to cast, tie knots, leaders and then understand the various fishing tactics, all of which were so familiar to me.

I pursued archery with a mission to get good enough to hunt deer that first fall so I spent a lot of time at the range as well as shooting 3D courses. I met a totally new group of friends that were dedicated to their sport of archery. I was also fortunate to meet a seasoned archer who was also a stillwater fly fisher. He wanted to learn more about fishing lakes and I was very hungry for archery and bow hunting knowledge. After a couple of years I’d say we both upped our respective games and have had a fun time at both activities.

A lot of my fishing friends scratch their heads when I tell them about my new found passion for flinging arrows. There are so many similarities between the two sports that I can see why I have been so consumed by both. Most evident is that both are very technical activities if you really want to have success. Fly fishing to me is still a quiet sport and one that lends itself to being alone, yet can be as enjoyable when fishing with a friend. Fly fishing requires patience and I definitely know I have a lot of that. Sitting in the boat waiting for the chironomid hatch to begin and then figuring the pattern out that lets you catch a bunch of fish is rewarding. I’ve also discovered that sitting in my ground blind while in a couple feet of snow for hours on end and waiting for a whitetail deer to come by is a very pleasant way to spend the day and as rewarding as having a good day on the water. Seeing a beautiful deer walk by takes the experience to different level that is hard to compare to catching fish.

I have certainly caught my share of fish and also released numerous fish of a lifetime. No question the excitement and satisfaction was there with many of those memorable fish. But when it comes to bow hunting and seeing that animal walk by, pause and potentially give me a shot opportunity, it is heart pounding, total exhilaration all happening within a few seconds. This adrenaline rush makes all that hiking or sitting in the super cold weather for hours on end and day after day so worth it.

And as a new bow hunter I have had numerous opportunities to release an arrow and have made every rookie, buck fever mistake in the book. From watching those deer bound away as they winded me, heard me or had an arrow fly over their back or under their belly as well as my arrow impaling an overhanging tree limb while en route to a nice deer. The neat thing is that while I was momentarily upset for blowing that chance it did not bother me as I was so happy to have had that up and close and personal experience. I’d go home pleased with the day and already re-living that moment and figuring out how to avoid that mistake again.

For both fly fishing and archery there is so much information available in all forms of media but I have found having face to face time with a knowledgeable bow technician or archery instructor to be the most valuable. Just like fly fishing, those small specialty fly shops or archery shops are such valuable services that not only help steer you in the right direction but ensure the equipment you are using is right for the job. I now totally understand that one tiny adjustment, be it in my shooting form or a minor tweak to the bow has such an impact on where your arrow is heading.

I’ve always approached fly fishing from a biological/ecological perspective. Having a sound understanding of the seasonal changes that occur in lakes or the life cycles of the trout food sources and some basic trout behaviour all combine to make you a more successful angler. Consistently successful hunters have paid their dues by following the same approach. I’ve just started this hunting journey and know that my days in the field will become more successful as my learning curve is shortened. Like trout fishing, there is a lot of joy knowing how or why you were able to fool the fish into biting your offerings. For me, a successful day of bow hunting is just seeing some deer up close as it’s a sign that I’m doing more things right than wrong and if I have an opportunity to harvest an animal it will be so much more than the icing on the cake.