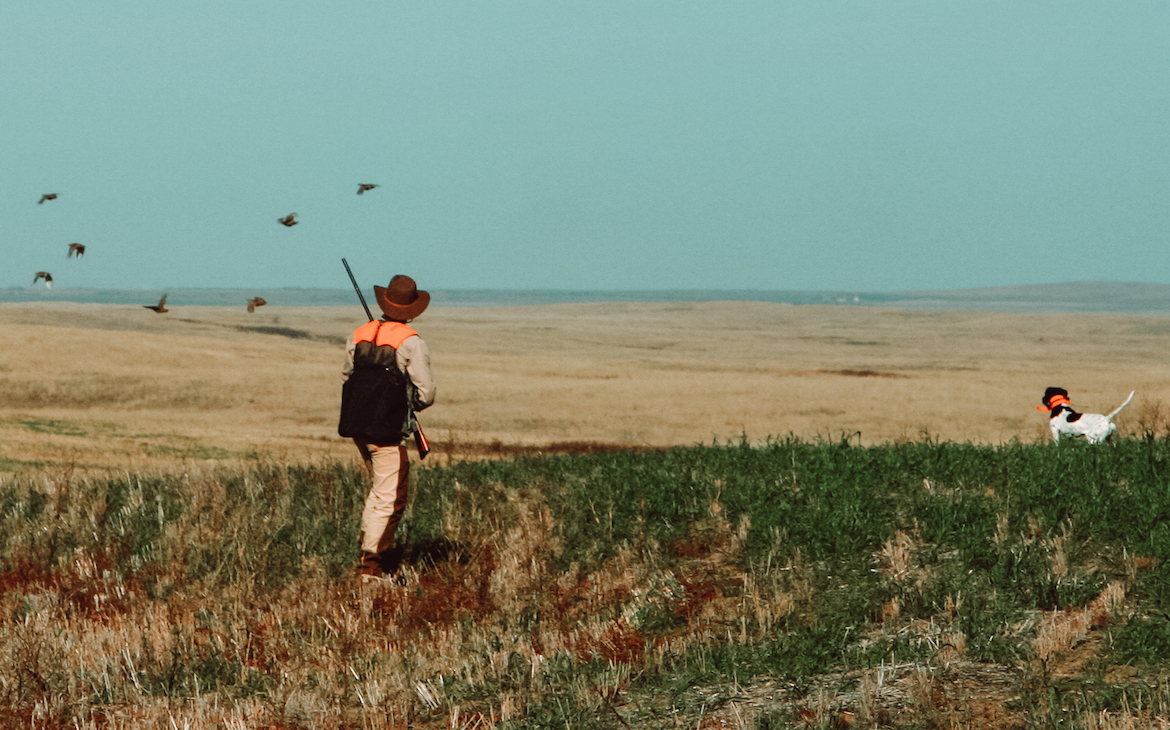 First things first. By western prairies I mean western North America: Alberta, Montana, Saskatchewan, North Dakota et al. The great plains of these states and provinces have been celebrated by the hunting press for decades, the bulk of the ink devoted to waterfowl and ringneck pheasants, which are the main reasons for shortages of rooms in small-town motels every autumn. Though there is no bird hunting I don’t enjoy, I’m not talking about waterfowl here and I’m not talking about pheasants. I’m talking about Hungarian (gray) partridge and sharp-tailed grouse.

Through the West the pheasant is King, with Huns and sharptails relegated to consolation status, not-very-important bonuses to hunters chasing bigger, gaudier birds. I’m one of a few renegades out there; happy enough to shoot a rooster that gets in the way or commits avian suicide (and I would never refer to one as a ditch parrot), but I don’t go out of my way to hunt them. When the day is over I might even forget that I’ve shot a pheasant if the Hun or sharptail hunting was particularly good.

Gray partridge were successfully introduced to the West from their native Europe via a 1908 planting in Alberta, and quickly expanded their range to Saskatchewan, Montana, Wyoming, Idaho and the Dakotas, where they thrive today. They are a covey bird and do well on land that has been broken for agriculture, particularly large areas of grain crops. They prefer lighter cover than pheasants and in autumn are often found in or around cut grain (stubble) fields that have taller cover nearby – grassy edges, willows, overgrown draws and coulees, ragged fence lines, and shelter belts. If there’s a quintessential Hun spot, it’s an abandoned homestead where overgrown grass and weeds meet grain stubble. Much Hun hunting today is on private farm land where permission to hunt must be obtained.

These are small game birds, between quail and ruffed grouse in size, and while not flashy to look at (they’re called gray partridge for a reason) their subdued tones project a modest beauty. Actually they’re downright cute, a fact that’s occasionally an impediment when asking a farmer for permission to hunt: “You want to shoot those pretty little birds that live in the yard and peck at the seeds in my garden?” “Uh, well, no ma’am, not those birds but others like them out in your lower field.” Oh, never mind.

Some of Huns’ habits make them harder to hunt; some make them easier. I like them for both. Their unison covey-flush is sudden and startling, creating far more discombobulation for a hunter than eight or ten little birds should be capable of. (It seems that one of them must count “one, two, three, go!”) The good news is they often don’t fly more than a few hundred yards, which makes following up the first flush for a second encounter a genuine possibility. They do run, but theirs is a nervous skulk-and-sneak, rather than the full-out sprint pheasants are famous for and seem to enjoy.

I’ll go out on a limb and say that Huns are the toughest and therefore sportiest wing-shooting target on the western plains. Their sudden covey-rise is unsettling, even when you know it’s coming, and because they’re usually coming out of light cover, there’s nothing to inhibit acceleration, and they get to top speed right now.

The appeal to Hun hunting is in the pastoral beauty of the farm country, the potential for thrilling dog-work, and the challenging shooting. Regarding the latter, I’ve observed a number of skilled pheasant shooters humbled by Huns, and their misses occasionally produce the aroma of sour grapes: “They’re too small anyway, let’s find us some roosters.”

Sharp-tailed grouse are native to western grasslands from Nebraska north and west through Alberta, Saskatchewan, Manitoba and farther north yet. There are populations in Alaska and the Yukon, and through much of their range they’re still called “prairie chickens,” a common if technically incorrect reference.

Sharptails don’t rely on grain the way that Huns often do, but neither do they object to its presence, and will eat it if it abuts the native prairie grassland that’s their primary habitat prerequisite. In Saskatchewan, Alberta and Montana, sharptail country is often cattle country – large expanses of prairie pasture punctuated by dry pond bottoms, draws, and patches of willow, wild rose, buffalo-berry and occasional small stands of aspen.

They are found in singles or small groups. The shooting is not particularly difficult, for they are sizeable birds (just a little shy of a hen pheasant), and usually depart in a staggered manner, often leaving “stragglers” that stay put when the main part of the group flushes.

Sharptails are considered good birds for pointing dogs. The country they live in is huge and in order to find the birds a dog must cover a lot of ground. Early in the hunting season (September or October, depending on location), the birds sit well, allowing dogs and hunters to approach closely. But as the season progresses, the weather cools, the birds gather into larger flocks and become notorious for flushing wild. And unlike Huns, late-season sharptails can fly and fly and fly until you can’t see them anymore.

Sharptails are found both on private land and on large tracts of public land often used for grazing cattle. They share the land with Huns and pheasants in areas where the habitat overlaps.

The appeal in hunting sharptails comes from the immensity and fierce wildness of the country they inhabit. I once wrote a piece about them titled “An Ancient Bird in a Lonely Place” – and those words still come as close as any I can come up with. Man’s intrusions into their habitat exist but are less apparent. Sharptails are often distanced from cultivated land, roads, cell towers and the like, sharing their bare and beautiful domain with mule deer, prairie falcons, antelope and coyotes.

You might have noticed that I’ve avoided explaining my lukewarm position on pheasants. Okay, here it is. I’m an insufferable fan of pointing dogs, and quite possibly a snob about it. To my interpretation, pheasants bring out the worst in a pointing dog. The problem is making them stop running and start flying – within shotgun range. The dog catches scent, makes game, searches carefully and points. The pheasant, mildly amused, thumbs his beak and starts running. The dog follows, perhaps eventually committing the crime of flushing a bird it was supposed to point. You may or may not see this happen, as it generally occurs a great distance from you.

I believe Huns and sharptails bring out the best in a pointing dog. The dog work tends to the dramatic, providing decisive wins or decisive screw-ups, and not much gray area. Your pointer (or setter or Brittany or shorthair) is out there a couple hundred yards, running hard across the breeze in prairie or grain stubble, when it makes a sudden pivot and stop that kicks up a little cloud of dust. The hair stands up on the back of your neck as you approach the dog; you adjust your hat and your glasses, you consider removing your gloves before shooting, you remind yourself to to keep your head down, to swing through, and do all the other things that have time to come to mind on your walk toward the stationery dog. When the birds go, you’re still surprised.

If fishing and hunting are largely defined by anticipation, this could be the best there is. And if this makes me a snob, I guess I’ll just wear it with pride.