Home » In Search of the Magic Bullet – Tyler Kushnir

In Search of the Magic Bullet – Tyler Kushnir 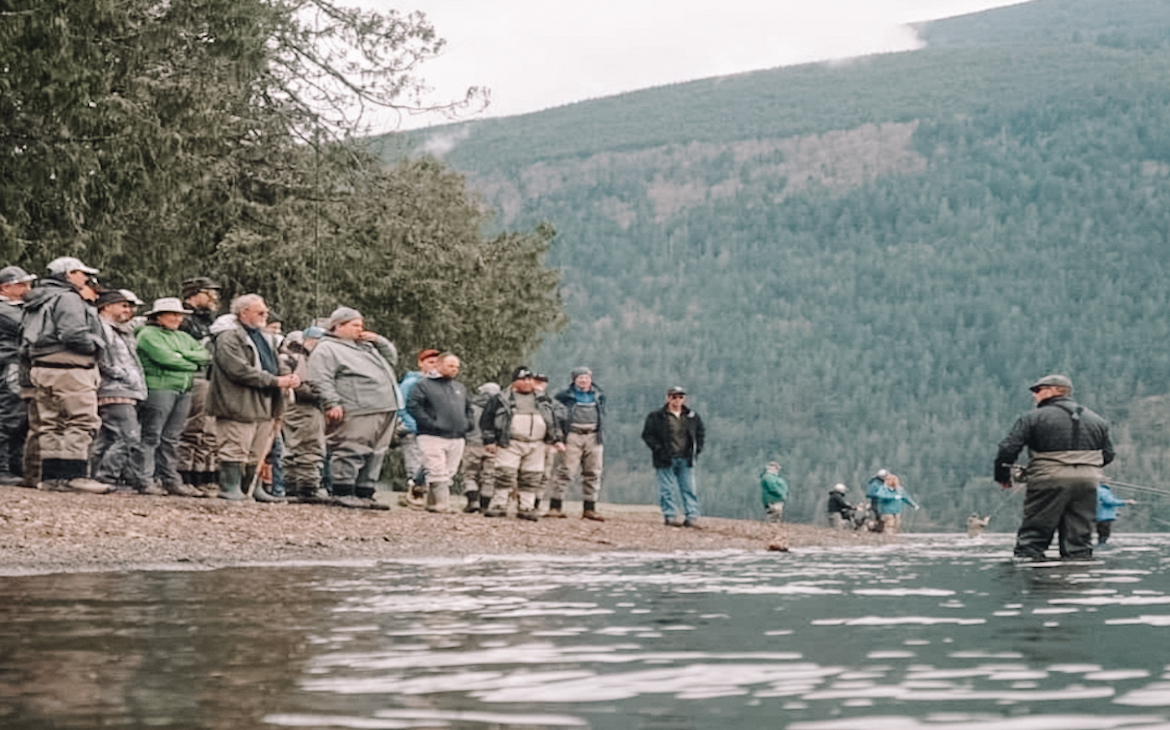 In the world of fishing with two-handed rods, the topic of casting is never far from the surface. The Spey rod itself is a fabulous tool for fishing, but without the cast, it doesn’t fish well. It follows that the better you cast and cover water, the more fish you will find. So for all of us there should be an ongoing interest in becoming a better Spey caster.

Unfortunately, there is a stance out there I hear all too often… it’s one I call, “I can get it out there so why worry.” This is fair enough, unless of course you want to find a few more fish. Now, there are some line systems that enable this school of thought. There is a reason guides love Skagit lines—not that being a really good Skagit caster doesn’t require skill—it does indeed—but in a half hour a guide can have their guest flopping the fly out far enough (hopefully) to catch a fish.

There is a second school of thought: I call this one, “The Search for the Magic Bullet.” This is where the angler tells themselves, “I am an okay caster, and if I just had a better rod or a better line, then I could be a really good caster.”

Without a doubt there have been a lot of fantastic developments in both Spey rods and lines. They all really do cast much better than they did 15 years ago. The weakness in the Magic Bullet train of thought is that these improved tools only work if you know how to use them. I remember back in the day, when Way Yin’s XLT line came out. The Magic Bullet crowd went wild after Steve Choate won the prestigious Musto Championship in Britain—the Magic Bullet folks just knew that if they got an XLT they would be great casters.

The problem, of course, was that the XLT was an expert’s long belly line and without expert skills the line was very difficult to cast. Then, thanks to the Skagit Jedis and in no small part to Ed Ward, along came the introduction of the Skagit line. The revolution that followed has been amazing: all of a sudden here was a line that most everyone could cast well enough to fish. However, there is a dark side to this Skagit revolution—and that is a result of its very strength—it is so easy to use that most anglers don’t advance their casting skills much past the flop-it-out-there stage. Again, not the worst thing, but there is so much more.

I have fished many days with Ed and he is a brilliant caster with his system. Simply brilliant. However, his skill is not due to his line… rather it is dedication to becoming a great caster that made him a great caster.

Here lies the issue, the crux of the Magic Bullet failure… there simply isn’t one. There is no short cut, no quick fix, no magic rod or line. The path to casting proficiency lies with one thing and one thing only—the only Magic Bullet is practice.

Rare indeed is the angler who actually practices! Yes, most people have limited time to fish so they don’t want to “waste” it on practice. Or they say they practice while they are fishing. The great Scottish caster Derek Brown once told me that I must practice with yarn only. He said the instant you tie on a fly you are only thinking about finding a fish—practice is not part of that program.

The time invested in practice will pay huge dividends. You will cover more water presenting your fly to more fish. The skills developed by real practice will enable you to ad lib when you find yourself in a weird wind, an awkward spot or near obstructions. It will also do nice things for your confidence—watching a sweet loop unroll over the water is a fine thing indeed.

So no matter what rod and line system you prefer: Skagit casters, Scandi casters, long belly casters—even competitive casters—will all reap the benefits of practice. Search not for a Magic Bullet. Instead, practice.

Episode #: 138 (click to listen)
Duration: 53 min
Topics Discussed: The Thompson River, getting older and competitive casting
Bio: Tyler Kushnir has been fishing for trout and steelhead since the 1960s. A retired high school teacher and well-known fishing personality, he’s been at the heart of steelhead advocacy for as long as I’ve known him. Tyler put in 18 years of guiding on B.C.’s Haida Gwaii before hanging up his hat and becoming vice president of the Steelhead Society of B.C. Tyler is a skilled float fisherman, though it’s Spey casting that consumes his time these days. A Spey-O-Rama competitor, he won the inaugural Senior Championship in 2012 and continues to practice and compete with the belief that it makes him a better angler.