Home » When Should I Change Flies? – Jim McLennan

When Should I Change Flies? – Jim McLennan 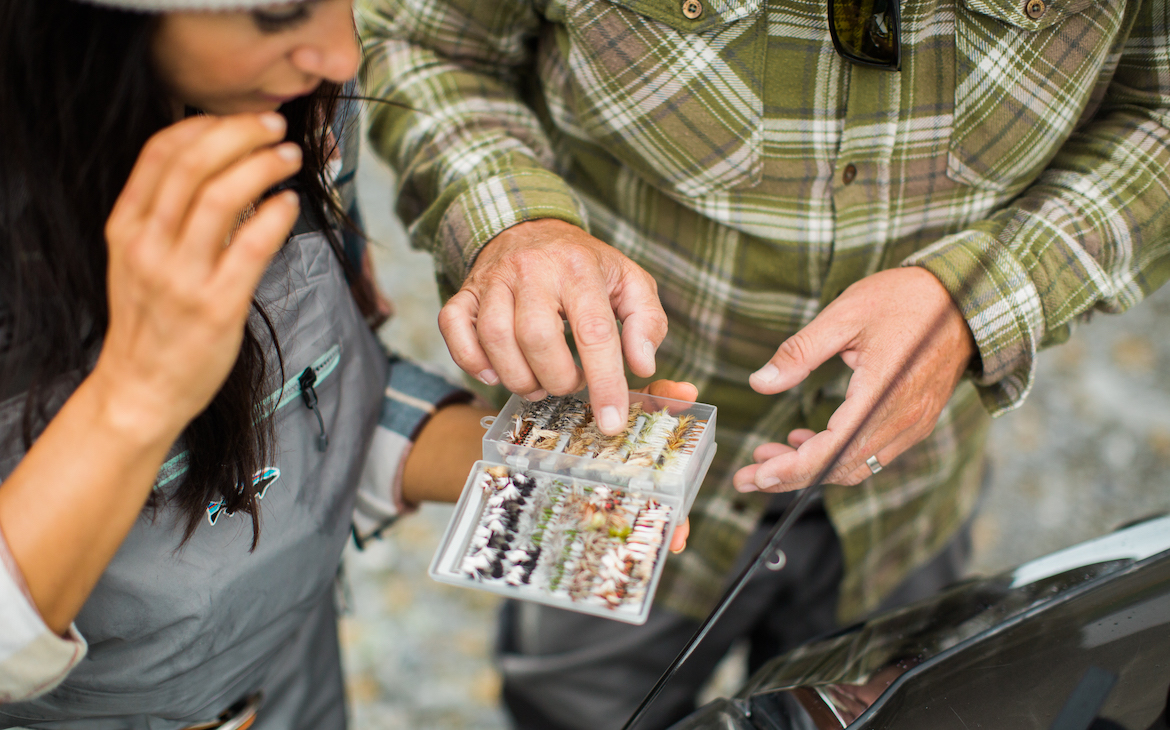 Regarding this question, fly fishers seem to fall into one of two categories—those who change flies more often than they need to, and those who don’t change flies as often as they should.

In some ways a fly change is an over-rated and over-used response to rejection from creatures with tiny brains: I’m not gettin’ any bites; must be using the wrong fly. If I was cynical (which of course I’m not) I might suggest that assuming the fly is the problem is a way of off-loading responsibility—a piscatorial version of the clumsy worker blaming his tools. But as I said, I’m not cynical.

Of course the fly could be the problem, but before you change it you should be as sure as you can be that that is indeed the case. For there are lots of other things that can be wrong and if one of them is wrong, there isn’t a fly anywhere that can fix it.

Once it becomes clear that the fish aren’t going to eat what you’re throwing, it’s time to change something. In fact the question of when to change flies is really just that: a question of when to change something. The worst thing you can do when you’re not catching fish is to keep doing what isn’t working. Yet people do it all the time, hoping I suppose, that the fish will eventually feel pity.

The first thing to consider is whether the fly is going to the right place. Make it easy for the fish to eat your fly. Don’t ask a fish to move a few feet to eat if you can ask it to move just a few inches. This of course, rests with your casting.

Meeting these objectives might require changes in casting position or terminal tackle. It doesn’t matter how many casts it takes, you shouldn’t consider changing the fly until you know you’ve made perfect shots several times. (And by several I mean maybe 5 or 10 times, not 250 times.)

A critical factor that’s not given enough consideration is the leader. It should be long enough to prevent the fish from being alarmed by the fly line landing nearby, and the tippet should be the right diameter for the fly (for trout fishing divide the hook size by four to get the “X” diameter of tippet you need).

The sport’s quintessential confrontation comes when a fly fisher encounters a trout rising steadily and frequently in moving water. You know where the fish is; you know that it’s feeding. This should mean you can catch it. So you try to determine which stage of which insect it’s eating, then stand in a place where it’s easy or at least possible to get an accurate cast followed by a perfectly drag-free drift right over the fish (not three or four feet off to the side of the fish). Sometimes a steadily rising trout will stop rising for the few seconds it takes for your fly to drift over it, but gets back to business as soon as your fly is out of the way. While this kind of behaviour drives me crazy I also kind of admire it. It’s a sure sign that the trout is looking but not buying, and that’s a sure sign it’s time to change something. You might try a longer leader or finer tippet—or a different fly. You could switch to a slightly different imitation of the insect the fish is eating, or to an emerger or spinner. As long as the fish continues to feed, you’re still in the game.

But if the fish stops rising altogether, stop casting immediately and watch awhile to see if it resumes. If it does, carry on casting to it. If it doesn’t, you’ve probably spooked that fish. Make a couple of Hail Mary casts and then move on.

When we see trout rising we possess extremely valuable information, and this is our preferred scenario. In these situations fly changes can come fairly quickly because the fish’s response will be readily apparent. But more often we’re “fishing blind” and it’s a little harder to be sure we’ve put the fly in exactly the right spot, so fly changes will come a little more slowly.

When you’re fishing unsuccessfully in a good spot there’s a decision to be made. You can stay there, crank the determination-knob up to 10 and persevere in the belief that the fish are there and you’ll eventually get ‘em if you try enough flies and methods. But another response that qualifies as “changing something” is changing location. Sometimes moving a couple of steps one way or the other will allow you to get a better drift. Or you could move to the next pool, or to a different type of water. As a last resort you can get in your vehicle and drive to a different stream.

But if you do that you’re admitting defeat. As long as you’re okay with that…